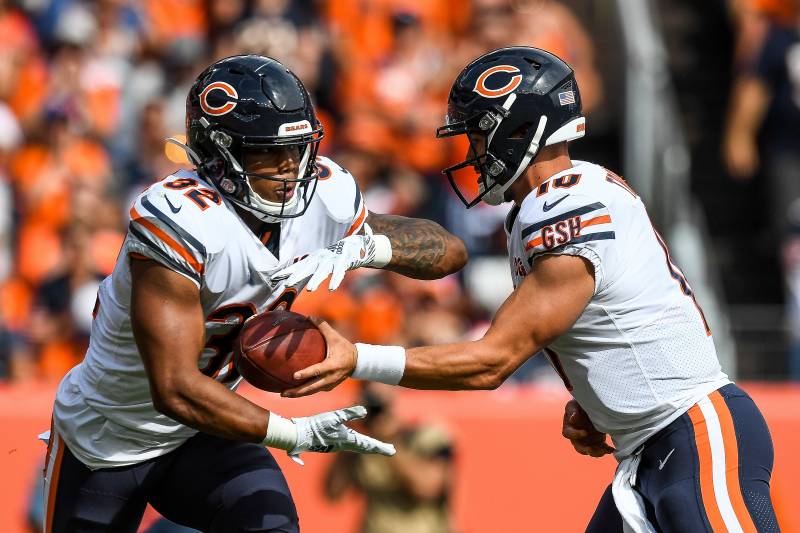 Yes, Mitch Trubisky has played well recently and the Bears have 3 wins out of their last 4 games. However, the larger sample size says that this is fool’s gold. I won’t even go with the fact he has played his best ball against two of the worst defenses in the league in those last four. The one loss was against a good defense in the Rams and Trubisky played terribly in that game.

However, playing well against anyone in this league deserves credit. The worst defenses in the league are capable of doing bad things to a Quarterback. No, the fact that when Trubisky plays well the rest of the offense suddenly comes to life is the one correlation. Suddenly, the WRs look great and drops aren’t an issue. The O-line can blast holes for their Running Backs and protect, a UDFA Tight End makes a great play down the field and you score more than 20 points.

Now, all the excuses the last of the ardent Trubisky defenders melt away. Yes, believe it or not there are still some left. Not exactly a unique concept to have an offense look good when you have good QB play. However, it does give some context. Now, if you want an offense to excel consistently your Quarterback needs to perform without the mask of playing against poor defenses.

However, it is year three in the league and two in Matt Nagy‘s offense to this point. Not only has he not yet shown a hint of being a franchise Quarterback. In fact, he has struggled to this point to get to just average. When your Head Coach is praising you for basic Quarterback stuff like reading threw a two and a three read progression in week 12 of year two in this offense the bar is clearly low.

Eventually, Trubisky may develop into a representative starting QB in this league but I do not see it in this offense. It is far too voluminous with way too many options in it that require not only his read, but the reads of his receivers on all the option routes the Bears run. Well, would like to run anyway. Thus far, they haven’t unleashed that part of their offense because Trubisky simply can’t handle it. It’s why you’re seeing so many of these hitch/curl routes.

Occasionally, you’ll see double move routes off a single read and they’ll take a shot. However, accuracy downfield has been an issue which is another story entirely. Nagy has had to severely scale down their offense to get Trubisky to play successful Quarterback, but that has made them more predictable and easier to defend as the Bears have been forced to run most of the things they ran last year which is the very basic fundamentals of this scheme and is all on tape for the world to see.

For those who want to blame Nagy for not calling an offense to suit Trubisky’s skill set, there is now no arguing that Nagy has done that which means a simpler more watered down version of what Nagy would like to run. It also gives context to why the offense has been criticized for being predictable by some media members early on. Robert Mayes of the Ringer recently came on the score and said he heard from someone with knowledge of the situation that Nagy had to scrap up to two thirds of what they installed for this season due to Trubisky’s inability to process this scheme. Here’s the podcast.

There are other elements of playing the Quarterback position that Trubisky still hasn’t developed. The field general part. As a Quarterback not only do you need to diagnose defenses, call audibles and set your blocking, as well as make split second adjustments and decisions should the defense counter correctly, but you have to be a coach on the field. A facilitator. I liken it to being a Point Guard on the gridiron rather than hardcourt.

You have to know what your guys can and cannot do and what your opponents can and cannot do, as well as, be able to identify tendencies to exploit their weaknesses and cover up yours. For example, you see a speed rusher lined up on the right side of the formation. Massie struggles against speed rushers but the play you call also requires proper depth in your drop to allow the routes to develop in order to exploit a weakness the defense shows you. So, as a coach on the field you now have to decide whether or not to move the launch point with a half roll away from the rusher to give you time or slide protection to that side. This may or may not weaken you with however, the defense reacts or adjust to what you did so the right choice is vital for the plays success. There are choices within your choices. You will never make the right call 100% of the time but you need to the overwhelming amount of the time.

I can go on and on with these types of examples. The point is Trubisky is so behind on all the schematic stuff that there really is no chance to develop the instincts you need to play Quarterback. Like seeing the field as a chart of mismatches both pro and con akin to your team’s roster and making decisions based on that.

This is not a condemnation for Trubisky’s overall career in the league. I do see a possible long term career perhaps even as a long term starter but elsewhere. Not in Nagy’s offense and Nagy does deserve to do things his way with his guy. Think Trubisky can flourish in a ground and pound power run first offense that takes shots off play-action in the passing game. That isn’t what the Bears run. Think if you have defenses playing to stop the power run game it would be easy to succeed with a small sample size of plays that are simple in design but can work with a matchup of players out there to stop getting their brakes beat off of them versus a power/man scheme.

So who do the Bears bring in to compete at Quarterback next season? I think you will have a combination. Trubisky will be back as the incumbent. If his draft status doesn’t cement it it’s his cap hit that will as he will have nearly 10 mil. of dead cap space attatched to him. Unless the Bears can miraculously trade him the Bears are stuck with him next year as a backup at minimum.

Next, the Bears will have to get a vet to either win the job in a competition but also as a backup who you can put in games without fear of being unable to run your offense if you’re Nagy. Chase Daniel is a baby sitter. Bears need someone who isn’t here to baby Mitch and make him comfortable. It’s the direct opposite. They need someone to make him uncomfortable because he’s coming for his job.

Who’s out there? Well, Nick Foles seems like a natural choice. He will be available next season via trade or as a waiver pickup. His price tag however, may prohibit that from happening. I wrote an article on the merits of considering Matt Moore. He knows the offense and will come cheap.

There are rumblings that the Raiders will be willing to let Derek Carr walk too. Cam Newton will be there but his injury history and poor fit in a Nagy offense makes him an unlikely choice. Not to mention his expected price tag like Foles. There’s Teddy Bridgewater who will also command a high price tag and may just remain with the Saints as Drew Brees‘ future remain unclear.

You can always pickup a guy like Case Keenum and hope he can just make the right decisions and allow his play makers to do the work for him and be this year’s version of Ryan Tannenhill. Bears could even go Tannenhill himself as he’ll be a free agent or even the guy he replaced, Marcus Mariotta. Other vet choices out there too like Andy Dalton who’s expected to make the market for example who will also cost you 17-20 mil. Bears will likely go with someone who will be happy to take the minimum or close it as the Bears while not terrible aren’t in a great cap situation. Sure, big names like Tom Brady, Drew Brees and Phillip Rivers are free agents but it’s doubtdul Brees and Brady ever leave their current teams and Rivers looks to be done.

Thirdly, Bears need to identify their next future prospect who fits what Matt Nagy’s vision of what his starting Quarterback should be. Preferrably someone who can win the job as a rookie but at minimum someone who can be developed to play in 2021 while being red shirted. Hopefully, Trubisky or the previously mentioned vet can have a good enough season to propel the Bears to a post season and perhaps even ride the defense, special teams and a productive running game to a title until the kid is ready. Good news is there are a ton of prospects in this years draft class. Bad news is half the league or more are also looking for a new signal caller.

For those still hanging on to the possibility that Trubisky can be the Bears starting franchise Quarterback, good news. He’ll likely be back. To those on the majority side you’re good news is Trubisky will have competition for the job. As sure as there will be a sunrise and set. Even if there is a miracle playoff run. It would be dumb to do otherwise and we are all hoping that this group isn’t going to make dumb decisions.