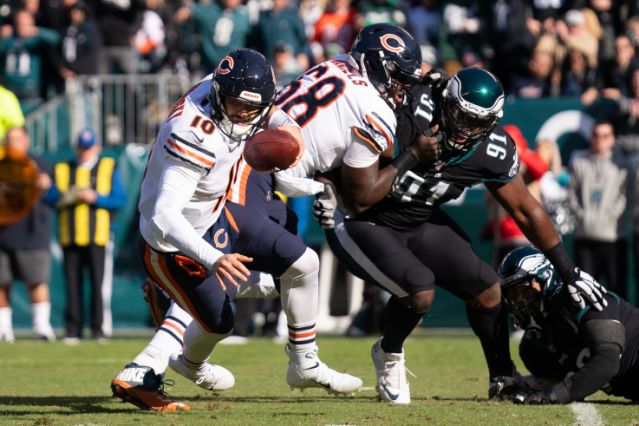 Here are a few takeaway’s from the Bears loss in Philadelphia Sunday afternoon.

Mitch Trubisky is hurting the Bears more than helping them, but do not expect a change at quarterback.

This Bears offense reached a new low in Sunday’s loss with their abysmal first half performance. They totaled just nine yards and one first down on six possessions.

The punt team got one hell of a workout.

You can point to a lot of issues with the Bears offense, but it will always go back to Trubisky. He gets the play started and the decisions lie in his hands. There were multiple times on Sunday that I thought Matt Nagy was going to bench his young quarterback because of his struggles. While Chase Daniel is not much of an upgrade, I bet he could move the sticks more than once in the first half. While he is not going to make insane plays, he is a game manager. Daniel can at least move the ball down the field, which is something this offense has really struggled with under Trubisky.

I sound like a broken record, but there is a lot of plays that I am not seeing enough of from Nagy’s playcalling. Trubisky is not a pocket passer. He needs to get out of the pocket and throw on the run. His deep ball to Taylor Gabriel in the second half? It was a play-action pass where Trubisky rolled out and got some room to deliver the 53-yard completion. Nagy then followed that play up with a QB designed run for Trubisky for a gain of eight yards. The drive would end with a Montgomery 1-yard rushing touchdown. Play-action and QB designed runs are strengths of Trubisky’s game and something we need to see more of as long as he is still the starter.

Montgomery has been a bright spot in an underachieving offense. He rushed for 40 yards and two scores and added 36 yards receiving. Not the best stat line but he punched it in twice to bring the Bears within striking distance.

With Mike Davis not even in the picture, which has been one of the biggest mysteries this season, Montgomery is going to handle the every down duties for Nagy. Despite losing to the Chargers two weeks ago in Chicago, Montgomery had the best game of his young career. He showcased his toughness to fight for extra yards, his speed to break into the secondary and proved he can handle the workload. With Trubisky’s struggles, the running game is more important than ever.

Leonard Floyd tallied just his third sack of the season in the 4th quarter.

After a strong second half last season and two sacks on opening night, Floyd has been a non-factor for the Bears defense.

Is this another missed first-round pick for Ryan Pace? Kevin White had trouble staying healthy and when he was on the field, he was a non-factor. Pace then traded up for Floyd and while he has shown flashes, he has not developed into a dominant pass-rusher. Trubisky is not the guy and that leaves Roquan Smith who should be a big part of the defense for years to come.

1-4 is a bad look for a general manager. Pace has built a nice roster and has found players in the later rounds, but you simply have to hit on first round picks. Those are your stars, your building blocks, the players who win you titles. And Pace trading up for Floyd and Trubisky has been a complete dud.

The Bears will host the Lions next week at Soldier Field

Could it be another ugly game on the lake front? Yeah, it really could be. But let’s stay positive because there is nothing better than watching football all day on Sunday.

The Lions will come in losing four of their last five. I know, not much better than the Bears but they are a struggling team right now too.

How do the Bears come away with a win? First off, the Bears need to get out to a strong start. Their opening drives this season have really put the offense back a lot.

Next, Nagy has to calls plays to Trubisky’s strengths. The Bears do not have an exciting backup QB to go to so you have to roll with what you got. QB runs and play-action have to be at the heart of the gameplan this week to get the offense in a rhythm.

Check back with windycitychronicle.com later this week for more Bears coverage!