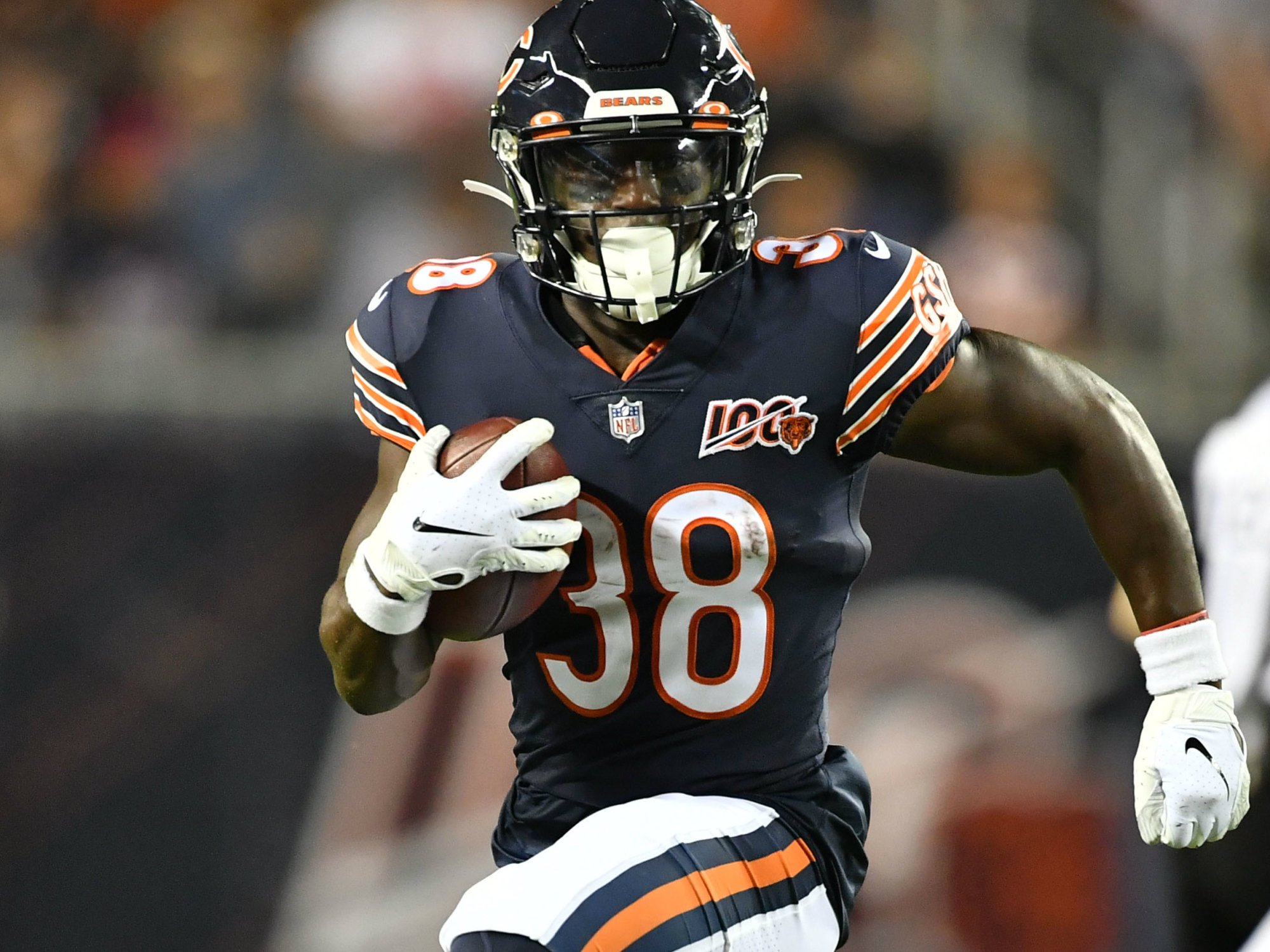 News flash, the Chicago Bears offense is bad. There are a lot of reasons behind why, but the biggest most glaring reason has been the lack of progression from starting Quarterback Mitch Trubisky. As nice as it would be to upgrade the Quarterback spot it’s not do-able. There are no saviors out there in street clothes and the trading deadline has passed, although there weren’t many options worthy of pursuit anyway. We know Chase Daniel isn’t an option as he is severly limited physically. Tyler Bray is on the practice squad but clearly is an in case of emergency break glass option.

So, that leaves the Bears with the option of upgrading around Trubisky to make him more effective. Matt Nagy has already made the first move in helping his struggling Quarterback by commiting to the run game last week in the loss to San Diego. The hope is he continues to do so, and letting go of what he would like to do in favor of what he has to do.

The I formation was particularly successful last week. While it should remain a part of the offense moving forward, Nagy needs to be a step ahead of the defensive coordinators who have seen the tape and will game plan accordingly. This brings up an excellent opportunity to call plays off of that trend and maybe have teams be caught offguard playing the I and getting burned on the play fake off of it. There hasn’t been enough of setting up a defense off of plays teams may overplay as a tell or a trend. I feel most of that is due to Trubisky not having the wherewithall to check into trend beaters moreso than Nagy not being saavy enough to do it.

However, this goes beyond scheme. Personnel is even more relevant. With the right personnel you can have all the tells you want and still succeed by beating your opponent physically. I think we saw a little bit of that this past Sunday. The Bears practiced it, game planned for it, and consistently executed it in game over and over and physically wore out their opponent. The Bears personnel was simply better than San Diego’s where they were missing 3 of their interior Defensive linemen for the game.

Now, with this mentality hopefully here to stay it’s time to make big plays off of the new found power running game. It starts with your running backs. Which brings me to Mike Davis. For whatever reason Davis is not being used. His limited useage after being signed to a nice free agent deal this off-season is eye popping. Check out this paragraph from Bleacher Nations Luis Medina. Here’s the link to the story I grabbed this from while researching for this blog. The Bears Could Snag Another Pick in the 2020 NFL Draft If They’re Ready to Dump Mike Davis

Bears fans: I just noticed that Mike Davis's snaps on offense have plummeted after the first two weeks: only a grand total of 5 snaps since.

Could they afford to cut him before Week 10? Because if they do, their 4th round 2020 compensatory pick for Adrian Amos would come back.

To say cutting Davis loose before week 10 is about as no brainer as it gets unless they suddenly decide to use him as originally planned but that would be unwise in my opinion. I must say I did not get the move, although, it was sound logic for many of the reasons Luis Medina mentioned in his article. However, with David Montgomery, Tarik Cohen and Cordarrell Patterson as options already and a couple young athletic and speedy options on the practice squad in Kerrith Whyte and Ryan Nall, Ryan Pace has one smart choice. Take the 4th round comp pick.

Focusing on the two practice squad options I mentioned I feel after the move is made waiving Davis, it might be time to bring one or both of the formerly mentioned up from the practice squad. Whyte particularly intrigues me as a weapon. His lack of understanding of his pass/pro assignments and lack of blocking technique limits his snap opportunities. As a package player he causes defenses issues by having to expend personnel resources to account for his matchup causing problems. Both as a runner and and a receiver.

Nall has the size to lead in the I-formation, the athleticism to run some of those U routes and block as an H-back, as well as, the speed to play halfback with the hands to catch out of the backfield and break long runs off. It’s time to see what he can do in real games and develop him if he shows true NFL ability.

I would include Wide Receiver in here as Thomas Ives showed true X potential with a nice catch radius and some impressive high point ability in pre-season games and in training camp as well. However, there are receiving options I would like to see get more opportunities. That or waive em and see if they make it the practice squad and use someone else.

Javon Wims is one of those receivers. He has shown nothing but production when he has been given snaps and targets in preseason, games and apparently practices. He should get at minimum 3-5 targets a game. Perhaps he will if the Bears continue to keep the ball with their new found running game and run more plays.

This now brings me to Riley Ridley. When the Bears picked him in the fourth round every analyst to a man called it a great value pick as many had him going day two in the draft. His big skill set was his route running ability, sure hands and cerebral game. The perfect possession receiver. Allen Robinson has been that for Trubisky but needs to be more of a big play guy. By giving Ridley the possession targets that frees up more downfield routes for Robinson as well as for Taylor Gabriel, Anthony Miller and Patterson who all have big play ability running deeper routes or ones set up for YAC. Let Ridley run the curl and hitch routes.

Other than Quarterback, Tight End has been the most glaring deficiency with the offense. Shaheen has not been the answer thus far and looks like a strictly go up and get it guy as a red zone threat. Trey Burton is beginning to look like a bust signing with each passing week with his availability issues starting with the Bears playoff loss to the Eagles in last season’s wild card round. This, after getting off to a good start with the team having a productive regular season in 2018.

Ben Braunecker appears to be a special teams guy who can backup in a pinch only option. J.P. Holtz has been a very good blocking option but offers zero as a pass catcher which means teams can use an extra linebacker or lineman as teams won’t need a DB to cover him which limits your matchup exploitation and in turn your offense.

Well, the Bears happen to have two Tight Ends on the practice squad. There has to be a reason for this as you need players at other positions to participate in practices. So I would assume there’s a plan in place to use at least one of them in some capacity. Well, use em. It’s not like they’re being blocked by irreplaceble options above them. Burton might be best served going on the IR. He has been non existent in games when he wasn’t inactive due to injury. It’s clear this injury has not healed properly. Time to sit him so he can heal. He’s evidently not a player who can make an impact at less than 100%.

Time to see what Jesper Horstead &/or Dax Raymond have to offer. Raymond was thought to be draft worthy by most who ultimately signed as a UDFA by the Bears. He was an older player which is the reason most analysts think he went undrafted at the tender age of 26. He was most impressive as a blocker this past pre-season ironicly enough after being considered mostly a pass catching Tight End. That could be valuable with helping out the running game should Nagy stay commited to it.

As for Horstead he showed some intriguing downfield pass catching traits running good routes and making spectacular catches showing a great ability to adjust mid-air and haul in passes with less than perfect ball placement. Something that may come in handy for a Quarterback that has struggled with ball placement.

I know this article has been offensive centric but there is a possible upgrade on the practice squad for the defense too. That’s at Edge Rusher. Isaiah Irving has been far from impressive not flashing at all. The Beats have James Vaughters who had a super impressive pre-season. It’s time to switch out Irving in favor of him. My guess is special teams may suffer because of it but the defense needs more big plays which means more pass rush and penetration in the run game for some TFL’s.

To wrap this up, the Bears need more big plays. There are some options to try out from the practice squad and on the current 53 man roster that need to be given looks. What they have been using now hasn’t worked as the Bears offense has been among the leagues worst. It’s a sad and telling fact when you long for the production of last season’s offense which ranked just 21st in points scored last year. It’s been time to give others a chance.