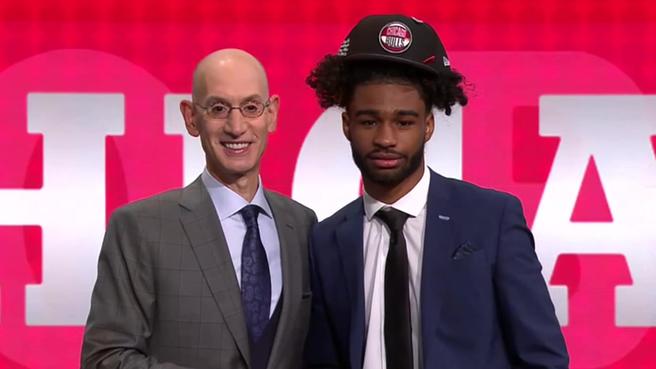 When the sixth overall pick of the 2019 NBA draft was on the clock in the form of the Minnesota Timberwolves everyone, (myself included), expected Point Guard would be the position targeted after they traded up with Suns from the eleventh overall pick. Especially with them likely losing Derrick Rose, an unrestricted free agent, and with the league wide belief they are not expected to resign restricted free agent PG Tyus Jones. Of course, Jones could remain if they choose to match any offer, but word is they have their eyes on DeAngelo Russell which leads many to believe Jones will be allowed to walk. However, with new rumors out that the Nets may not sign Kyrie Irving (who has been linked to the Brooklyn Nets for months now) if Kevin Durant isn’t teaming with him, the Timberwolves may just hold on to Jones. Perhaps this is why they chose to draft Jarret Culver over Coby White. Whatever the thinking by the Wolves it opened the door for the player the Bulls clearly wanted all along since they fell to the 7th pick when the dreaded lottery envelops were opened.

The White pick has a broad range of possibilities for the Bulls especially with their free agency approach. With White aboard, perhaps the Bulls are not so gung-ho on getting a top tier free agent point guard now, or even a second tier one for that matter. When interviewed by Score beat reporter and sometimes fill in radio talk show host David Schuster, Bulls team Vice President of basketball operations John Paxson had some interesting and possibly revealing comments on how the Bulls will approach this upcoming free agency period.

The first comment that leads one to believe the pick of White won’t necessarily prohibit the Bulls from signing a veteran PG came when Schuster began his interview by intimating the pick of White would be the Bulls answer to the starting PG position with his speed and versatility falling inline with today’s modern point guard. Paxson, acknowledge it was certainly a factor, but than called White a combo guard and hinted at the possibility the Bulls will play both he and incumbent point guard Kris Dunn in the backcourt together.

However, when asked what approach the Bulls may take in free agency Paxson said they would likley target players with good basketball character and leadership qualities to help mature and develop their young players along which leads one to believe they’ll look for older less expensive veterans to come in and help bring the rebuild to it’s next phase. Learning to win and make the post season. So don’t discount the possible addition of a veteran point guard via free agency, but also don’t expect a costly long term player either.

In White, the Bulls have a Dynamic athlete who isn’t necessarily explosive as he is quick twitch. This is what attracted the Bulls to him most.

In a statement from Paxson’s presser after the draft he said, “The way we want to play is you have to play faster in today’s game. You have to get the ball up the floor. He than went on to say, “This young man can play an up tempo game. As you know in our league today, lead guards tend to score and do a lot of things on the floor. We think he has the ability to score and handle. He’s quick, fast has the positional size at 6-5 that we really liked and brings a lot of intangibles. As a young man, He’s a guy we’re really going to enjoy having here.”

Again, as in the score interview he seemed to avoid pigeon holing White as a point guard alone. White has been widely viewed as a score first guard. A label he seems to want to shed from the get go.

In his presser White emphatically proclaimed, “I’m a point guard.” When asked if he sees himself as ready to take on the challenge of being a point guard in the NBA White replied, “Everything is going to be a transition, I feel like for anyone because you’re playing against higher competition, better players. Everybody has to make the transition. I think my transition will go over well. I learn quickly. I’m a great listener, and I’m always trying to improve my game in any way.“

Paxson echoed White’s feelings saying, “He’s 19. We have to keep that in mind. Most of these guys in this draft aren’t finished products, not anywhere close. Do we believe he will learn and grow? Absolutely. All of our background on him is he’s the type of young man that will take the challenge on.”

As for White’s game it isn’t incorrect that for a 19-year old White’s offensive game is advanced to the point he’s ready to score in the NBA right now. Outside of his NBA ready size he’s as quick as a cat and as sudden as a hiccup. He can create his own shot off the dribble in the half-court and he can run a break and finish in transition. He’s already a good shooter from distance converting over 35% of his 3 pt. attempts. He averaged 16.1 points a game in just 28.5 minutes per. When you extrapolate his scoring average per 40 he has a 22.5 point a game average. With his ability to get to the rim and contort himself to get shots off after absorbing contact you see a lot of free throw opportunities for him which should result in a high conversion rate as his 80% Free throw percentage would attest to.

Just because he’s a good scorer doesn’t mean that he doesn’t have a chance to be a very good playmaker for his team. There is evidence that he does have the mindset to be a facilitator. Even as scorer he has shown to be unselfish putting team first. He did lead the Tar Heels in Assist average at 4.1. He certainly has the IQ and basketball character to learn how to run an NBA half court offense. I think he has already shown the ability to lead a fast break in the NBA. His per 40 average is 5.7 assists per game which isn’t terrible for a scoring combo guard. His advanced stats are even more indication of his potential to be a star guard in this league. His win share was 4.1. His win shares per 40 was .165 well above the average of .100. His effective field goal percentage is .516 and his true shooting percentage is at .556. This shows he isn’t some reckless rec. league chucker. He takes smart shots.

I think people need to start looking at White as more of a combo guard. A player comp I and a few others including ESPN’s Chauncey Billups see similar to him is former three time NBA All Star Gilbert Arenas who was an undersized combo guard. In spite of being a prolific scorer Arenas did manage to average 5.3 assists during his career to go with his 20.7 scoring average. I don’t think anyone would complain about having a player of that caliber on their roster.

Now he isn’t flawless. He needs to play with better more controlled tempo as his inclination to constantly be up-tempo leads to some unforced turnovers. He tends to play with his hair on fire more than would be preferred. Something that one would assume will diminish as he matures into not only a veteran player but a man. He is still a teenager something hard to remember as he is incredibly mature for a 19 year old. He also needs to be a better defender and develop strength. Something pro coaching and an NBA weight room and nutrition program should take care of assuming he’s committed and there is nothing to suggest he wouldn’t be.

In White the Bulls appear to have a long term answer at an incredibly important positional need for now as well as their long term future. White should play immediately and often right away and should be expected to contribute as his game advances and develops to the pro game. The only question is will it be as an option off the bench as a positional matchup player or as an immediate starter as the Bulls lead guard.