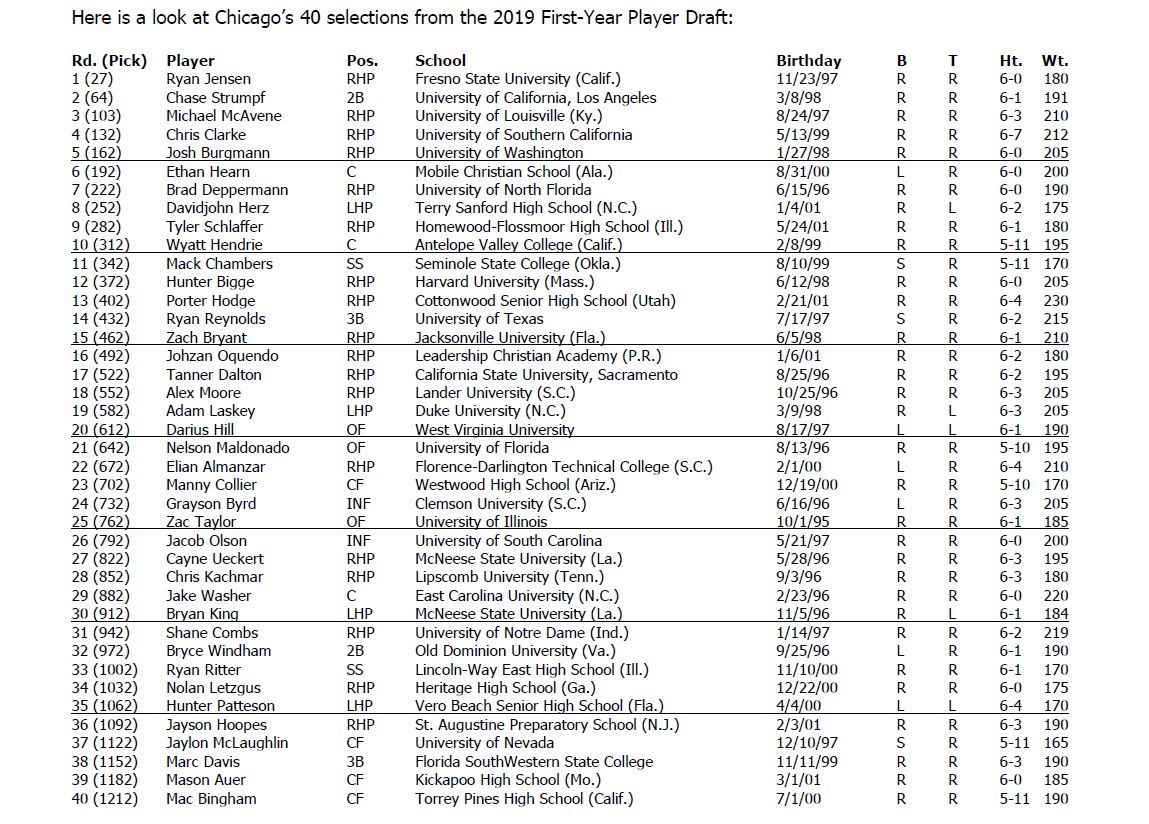 When it comes to the Cubs past draft philosophy it has been well documented they preferred to go with position players high in the draft and take chances later in the draft with some high upside arms and rely on their development to bring them along. While that philosophy has worked with team success, it did not work specific to drafted pitching talent. So far, the Cubs have had to go almost exclusively with free agent acquisitions and trades to fill out their pitching staff. Not that that is a bad thing but if they had developed younger arms they may have been able to keep guys like Jorge Soler, Danny Vogelbach, Gleyber Torres, Eloy Jimenez and their one gem of a drafted pitching talent Dylan Cease a little bit longer to see which of their prospects would be keepers and who they could use in trades. For example, who wouldn’t rather have Torres at 2nd base over Addison Russell or Cease over Carl Edwards or even Jimenez over Kyle Schwarber possibly. I think it has yet to be determined who will be the better player although it looks like Schwarber will be the better defensive outfielder, and who would’ve thought that at first blush.

Well, in this draft the Cubs have looked themselves in the mirror and decided to throw numbers at their problems and invest in pitching, pitching, pitching. The battery in general. The Cubs did draft a fair amount of catchers as well, drafting two in the top ten and three overall. However, pitching was the most addressed need by far in the 2019 draft. More than half of their picks (21) were spent on pitchers. The Cubs also went the express route as far as developing relievers drafting college relief pitchers rather than go the starter route first and if they don’t cut the mustard stick them in the pen.

In the case of their 3rd pick Michael McAvene out of Louisville he has the chance to convert from reliever to starter down the line. If not the Cubs have drafted one of college baseball’s best relievers. He’s also gotten the dreaded Tommy John surgery out of the way so his current 95 MPH heater has a chance to get even better from here on out. The very next pick was Chris Clarke out of USC who also converted to the pen after a Tommy John procedure and thrived. It got him drafted in the fourth round of the draft with the Cubs. The 6’7″ powerfully built righty with a powerful arm should move fast in the system with his combination of stuff and command. He’s another guy that can make the switch back to starter but I have a feeling that with both McAvene and Clarke the plan is to push them through the system as fast as possible and add them to the Cubs pen as power arms.

The Cubs did get some position players too. The pick before both of the aforementioned relievers was UCLA second baseman Chase Strumpf staying with the team philosophy of picking middle infielders as they are the usually most athletic players on a baseball team and can move around positionally because of it. Strumpf made an immediate impression hitting a home run after he was picked by the Cubs while on deck. While Strumpf has some pop in his bat the 5’11” 197 lb. second baseman profiles more as a top of the order bat with a .422 on base percentage.

The Cubs fifth pick was a high school catcher Ethan Hearn who was ranked 66th on Baseball America’s big board, so this was a direct opposite of the Cubs top pick. Best bet is he was available this far down at 192nd overall was because teams felt he’d be impossible to sign. He is committed to Mississippi State one of the best college baseball programs in the nation and would likely require a very large overslot contract to agree to sign with the team.

Their next pick was another high schooler Davidjohn Herz (yes that’s his first name) a LHP out of Terry Sanford High who is committed to North Carolina and is another player the Cubs will have to dig deep into their draft pool money to sign. This could prove difficult as they have very little to spread around with only a 5.8 Million dollar pool to pay the entire class with. So it is likely they don’t sign a good portion of their 40 picks.

The Cubs finished off the top 10 with a catcher from Antelope Junior college by the name of Wyatt Hendrie. On day 3 the Cubs continued their run on pitchers by picking 15. Three of them left handed. The one thing to note on the pitchers they got were that most of them have plus velocity so the Cubs have recognized the fact that they are one of the least stuff staffs in the MLB. Especially with the starting rotation. Another thing to note is the Cubs went high percentage with not only college arms but seniors. This leads one to believe that the Cubs are looking for not only signability but mature arms that need less development. That means taking guys who may not have been as dominant in college, because there is a reason they weren’t drafted much sooner in their college careers, but also have the stuff but for some reason or another it didn’t translate in dominance at the college level. Again, the Cubs are betting on their pitching lab to develop these arms much in the way the Astros have famously done with use of their trackman system (a high speed camera) that they use to measure spin rates to improve velocity and late movement. Time will tell if the Cubs new approach will bare fruit but it is a worthy undertaking and one that frankly needs to be done. The Cubs desperately need to develop home grown arms for Depth, cost control and a trade chip or two.

The plan appears to be developing replacements for what will be an inevitable loss of talent as it will be hard to pay and keep all of their high end position talent and their current pitching will be retiring after their contracts are up most likely. Even if a pitcher or two decides to keep pitching the Cubs will no doubt let them walk via free agency. At current, the two starting pitchers I’d project still being on the cubs staff would be José Quintana and Kyle Hendricks in 3 years when the current crop of starters would be ready. Yu Darvish may still have some life in his arm 3 years from now, but for a power pitcher it’s a big risk to pay for what he may command. Especially with a less than impressive start to his Cubs career, although, he’s pitched much better of late. It’s still likely the Cubs will have to supplement with Free agency to fill spots in the rotation. The phase in adding to their system is the international draft which I will get more in depth in an upcoming blog. Stay tuned.