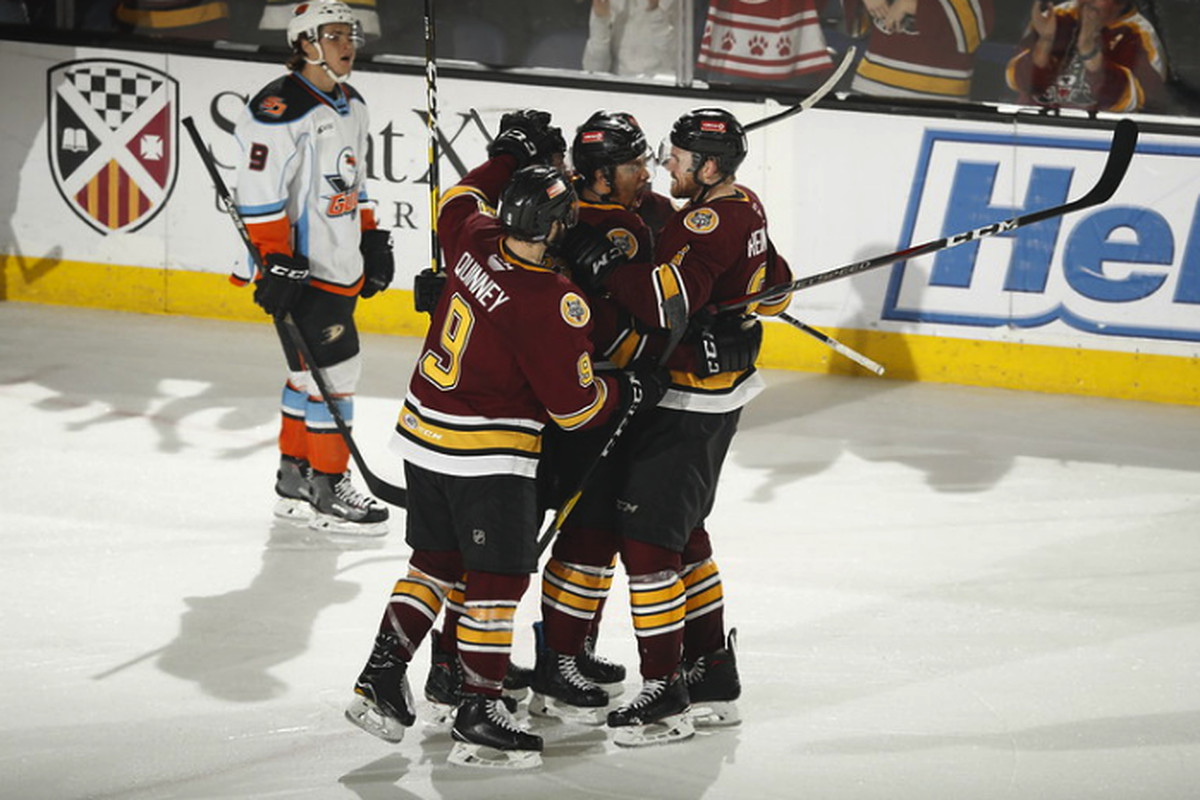 It has been an 11 year wait, but the Chicago Wolves are back in the Calder Cup Finals at last. Their game 6 victory over the San Diego Gulls at Allstate Arena Monday evening clinched their date with destiny as they will have a chance to win it all for the first time since 2008. The last time they won a Calder Cup, John Anderson was coaching and Jason Krog scored a hat trick in the clinching game. Chicago has two Calder Cup wins (2002, 2008) and two Turner Cup wins in their IHL days (1998, 2000).

This year they face the Charlotte Checkers, a team that was a familiar foe to the Wolves before recent divisional realignment. Charlotte in the regular season recorded the most points in the AHL (110) and won 51 games.

Their biggest scoring threat is winger Andrew Poturalski, who has scored the most points the Calder Cup playoffs (18). Poturalski recorded 23 goals and 47 assists in the regular season. Center Morgan Geekie is fourth in points scored these playoffs (15) and has tallied seven goals. Alex Nedeljkovic has done most of their goaltending these playoffs, and sports a 2.28 GAA and 9.14 SAV%. Dustin Tokarski is their backup and has played in three playoff games.

For those Chicago hockey fans out there who closely follow the Blackhawks as well, former Blackhawk Tomas Jurco is on the Checkers roster. He has six goals and eight assists in the playoffs so far.

As for the Wolves themselves, they will open a series on the road for the first time in these playoffs. The team with one of the best offenses in the AHL will boast the likes of Daniel Carr, Zach Whitecloud, Cody Glass, Tye McGinn, Curtis McKenzie, and team playoff point-leader Tomas Hyka. The wealth of goals scored has been spread around among the team very nicely. While Hyka leads in assists, McKenzie leads the team in playoff goals (8). Glass has a pair of overtime goals including a breakaway goal in game one of the conference finals; Carr has an OTGWG goal of his own. In between the pipes the man has been Oscar Dansk, who owns a 2.16 GAA and 9.21 SAV%. He has come up huge in a number of close games and has a very reliable backup in Max Lagace.

Overall there is really nothing flukey about this match up. Both teams won their respective divisions and were among the absolute best in the AHL this year. It is worth noting both their parent NHL teams (Golden Knights and Hurricanes) made the Stanley Cup playoffs this season as well. Both strong systems. This series could go either way and could easily go all seven. The Wolves may not have home ice advantage, but they have had success on the road in the playoffs so far. We should be in for a good one.