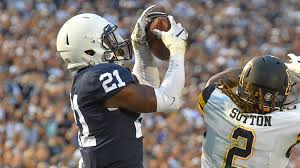 3rd Round: 87th overall – Amani Oruwariye – Penn State – CB – Oruwariye is a scheme transcendent player oozing with traits. He is equally as effective in zone as he is in man. There aren’t very many negatives in his game, however, he does tend to shut it down from time to time and appears to make some Deion Sanders-esque business decisions out there.

In perhaps a related reason he also has questions about his tackling. Tends to be kind of a catcher more than a striker or someone who squares his opponents up pre-tackle. It may be due to his effort level as he tends to get bashful around piles and shies away from being around traffic.

He appears to be a good kid and by everything I’ve read about him he’s solid in the locker room and puts in the work off the field in practices and in the classroom, so perhaps when surrounded by the right vets and leadership he can play up to his size and be more of a consistent physical tackler. He appears to be self aware about his negatives as he did mention the fact he feels he needs to keep in mind he’s a bigger man and needs to play more like one during an interview with a reporter for the Draft Network at the combine.

Another positive in Oruwariye’s game is his IQ and instincts. Rarely will you see him get beat snoozing on a play. He also is disciplined versus double moves and has good eye discipline when playing off zone or man. He has excellent ball skills too as he has 9 interceptions and 20 pass breakups the past two seasons. Has future all-pro starter written all over him but has a floor that makes him at minimum a solid starting corner.

For a bigger corner he’s very agile and athletic but does show a little stiffness coming out of his back pedal at times when he has to flip his hips on trail technique. It’s not a drastic deficiency as he generally defends passes very well when in trail. Has good click and close when playing downhill as well. Also, very good at high-pointing on 50/50 balls and plays through receivers at the catch point when behind receivers without drawing penalties. The Gifs I have compiled will show all these things I’ve mentioned.

In these two GIF’s you will see what I was talking about in regards to his ability to play through the catch point without pre-contract resulting in a flag showing strong hands to basically take the pass away from the Receiver for the pick.

Here, Oruwariye shows he can be a devastating striker when he wants to be putting the boom down on this Wolverine receiver dislodging the ball resulting in an incompletion.

In this next GIF Oruwariye shows his ability in trail technique keeping the Receiver in his sights while running with him down-field and ultimately turning his head, locating the ball and walling off the Receiver ala basketball style box out and high pointing the ball for the pick. Even shows great concentration as he basically caught this blind as the Receiver grabbed his helmet and yanked it to the side as the pass was about to be caught. Text book.

On this play, Oruwariye shows off his agility and superb ball skills making a back shoulder grab like a wide receiver.

Here, Oruwariye shows off that click and close ability as well as his awareness as his teammate and he play off each other playing perfect coverage off this bunch set by the receivers. He recognizes, plants and drives downhill to bat the pass down. On the second play in this GIF he displays his eye discipline in off coverage playing a quick slant at the goal-line to perfection batting away a sure touchdown catch.

On this play, Oruwariye shows his ability to play the run with great awareness and diagnosis on a jet sweep. He also shows his catch and grab tackling technique. While effective here, he does need to be more technically sound to be more consistent as a tackler in run support.

In this GIF Oruwariye shows his ability in run support. 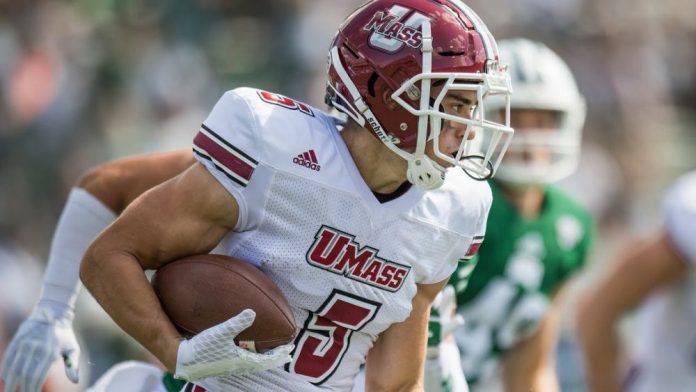 4th Round: 126th overall – Andy Isabella – UMASS – WR – Isabella may be the fastest player in this entire draft class. Just the type of receiver Matt Nagy would love to have running various routes from various spots on the field. Isabella is a small wide receiver much like Tyreek Hill which Nagy and Andy Reid used masterfully in Kansas City.

While Isabella’s size suggests he’ll be a slot receiver at the next level much like Hill, he also shows the ability to play out of many spots and run various routes like Hill at the next level. If he’s here at 126th overall I would have to assume Nagy would have a great deal of influence in convincing Ryan Pace to pick the speedy quick twitch wideout to add to his weaponry to complete his stable of toys to play with.

Here, you simply see Isabella’s speed to stretch the field as he easily separates 2-3 yards from the overmatched Defensive Back and after making the grab puts on the Jets to leave the coverage in his dust for 6.

Isabella shows his tracking ability here grabbing the pass over his shoulder for a touchdown.

On this play, Isabella takes a simple smoke route to the house outrunning the entire defense for a 55 plus yard touchdown. 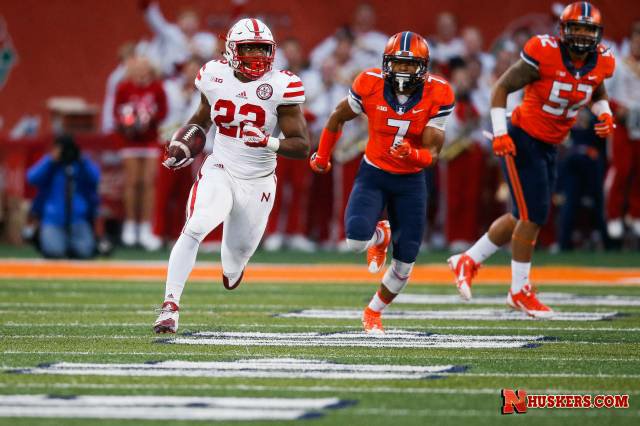 5th Round: 162nd overall – Devine Ozigbo – Nebraska – RB – Ozigbo is a big back with quite a bit of juice making him an excellent prospect as a future 3-down starter at the next level. He shows good hands and the IQ to matter on passing downs as a blocker, outlet receiver and even out on routes from the backfield, slot and even out wide as a first option. Below are GIFs that display everything the soon to be former Nebraska Running Back’s skill set offers.

Here, Ozigbo shows his ability to track the ball on a route making him a legitimate weapon as a receiver.

On this play, Ozigbo shows his worth as an outlet receiver that would make him an excellent option for Trubisky to throw to when the pass protection breaks down and coverage downfield takes away his receiving options in his progressions.

Here, he shows his explosiveness as a runner and his power.

7th Round: 222nd overall – Darius West – Kentucky – S – West is an alpha male who shows tremendous leadership on the backend which goes well with his high football IQ. He is a powerful striker regularly making big hits in the run game and on would be receivers who dare run in front of him on pass Routes. West would make an excellent replacement as an in the box safety replacing the recently departed free agent Adrian Amos on sets requiring one.

On this play, West shows his physicality as a tackler planting the runner with extreme violence.

On this play, West exhibits keen diagnostic skills immediately recognizing the play and coming downhill making the one on one open field tackle.

Here, West shows something in pass coverage being at the right place at the right time to catch a deflected pass for the pick. 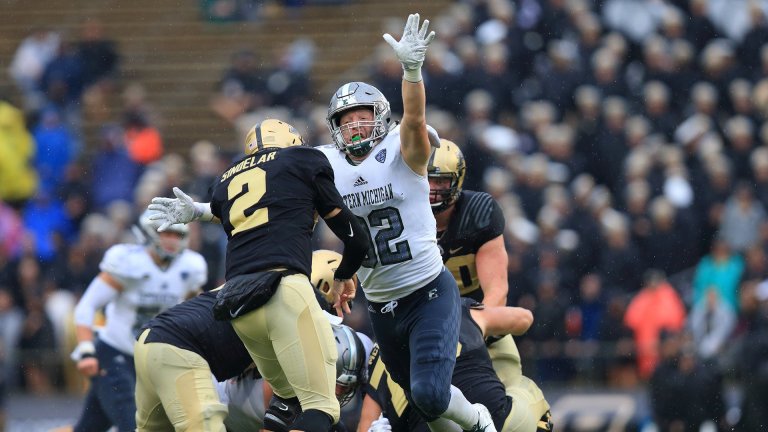 7th Round: 238th overall – Maxx Crosby – Eastern Michigan – DE: Crosby is an excellent athlete showing a lot of speed and quick twitch to be a real factor as a pass rusher of the edge. He shows good hand work but had more projectability in this area as well as in shoring up his counter moves with more development.

The question with Crosby is his size. He shows the frame to add weight and increasing strength but has yet to develop his body to compete against bigger stronger players in the NFL who can also match his athleticism. At this level he simply won with superior athleticism versus FCS level football players. In this part of the draft Crosby would make an excellent developmental project where he can be red-shirted while he has a full season in an NFL weight training and nutritional program to add the necessary weight and strength to complete against NFL players.

Here, Crosby shows both excellent hand work and motor as well as speed as he knocks the hands of the offensive linemen down attempting to block him and than runs around him chasing down the quarterback who left the pocket anticipating the pressure from Crosby.

On this play, Crosby shows his advanced hand usage outfighting the Right Tackle keeping his hands off him and showing his edge bend cutting down his path to the Quarterback for the sack.

Admittedly, the first two picks would come at extreme value and both player would likely not be there at the slots the Bears are in. However, it does remain possible given the depth at their positions and the high number of players available at Edge, interior Defensive lineman, as well as Offensive line at the top of the draft that will push the talent at Cornerback and Wide Receiver down to where the Bears pick.

It also was another traits driven draft as the Bears will be picking late and will likely be trying to maximize value going with physical traits over accomplishment at the college level relying on development. This draft class is loaded with it.

Isabella ran a 4.31 40 at the combine and as you can see from his GIFs it totally translates to the field.

This draft would give the Bears a lot of explosive big play athletes who could all make the 53 man final roster. It would also address depth needs. Some would include Tight End as a need but I for one am very comfortable with the current 3-man rotation of Trey Burton, Adam Shaheen and Ben Braunecker. Also, the news of the Bears resigning Zack Miller with some noise of his return as a player makes it even less urgent of a need.