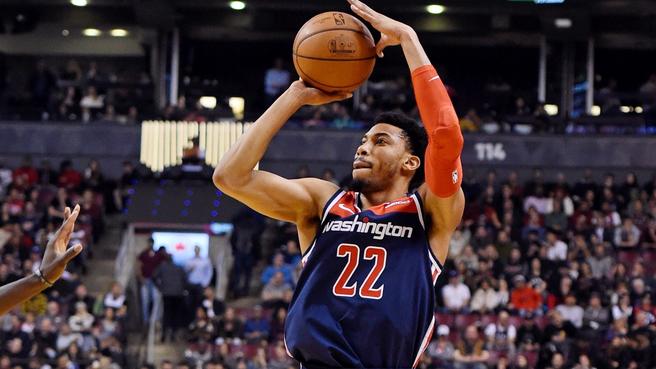 The Bulls traded Bobby Portis, Jabari Parker and a 2023 second-round pick to the Washington Wizards for Otto Porter Jr. Wednesday night. Portis and Parker left the arena shortly before tip-off and according to people inside the building, Portis was completely shocked by the move. It was reported by K.C. Johnson of the Chicago Tribune earlier this week that Portis’ agent told the Tribune that he had not heard of Portis being involved in any trade talks.

Porter Jr. joins the Bulls averaging 12.6 points per game and 5.6 rebounds per game. He is shooting 37% from three this season. He is a nice piece to put with Zach LaVine, Lauri Markkanen, Wendell Carter Jr. and if the Bulls decide to keep Kris Dunn.

Right away, this move tells me the Bulls are not going to be players in free agency. This is their big move in 2019 because Porter carries a lot of money with him. When you look at the numbers and his cap hit, it says he is not worth the money. But I think this is a good deal for the Bulls knowing they were able to move expiring deals for a locked up player with potential to fit with young players.

Porter Jr. is a nice addition to the Bulls rebuild. He’s not a star but he should be a nice piece next to LaVine and in the starting lineup. He’s a slasher and a solid defender. This is not a bad move because the Bulls are acquiring someone who has shown he can play in this league and be apart of the rebuild in Chicago. This is not acquiring Cameron Payne from the Oklahoma City Thunder. You know what Porter Jr. is and you are hoping a change of scenery combined with a young nucleus that it works out.

For the pieces departing, Bulls fans saw Portis grow into an NBA player. Looking back, it was a great pick by the Bulls in 2015. It seems like just yesterday that Portis was exploding off the bench with 19 points in Game 1 against the Celtics two years ago.

There are so many other Portis moments. From his usual crazy eyes, flexing, and his ability to take over games off the bench is what you want. But there are many factors that did not favor Portis. First, the Bulls have prioritized the front court in their past two drafts selecting Markkanen and Carter Jr. Not good news for Portis fighting to crack into that starting lineup. Second, the Bulls tried to come to an agreement with Portis on a contract extension but Portis opted to bet on himself as he heads to restricted free agency. His season has been shorted by injury but he is averaging 14 points through 22 games this season. Portis is going to demand a nice pay day this summer, maybe in the ball park of $15-17 million. The Bulls are not going to pay a 6th man that kind of money. Portis can be a starter in this league and maybe the Wizards see him as that and will pay him this summer.

Portis developed into a nice player for the Bulls but in the end, it did not work out. The front office did a good job getting something for him instead of letting him walk.

As for Parker, the Bulls picked him this summer on a team friendly deal, the second year of a $40 M being a team option. It was a low risk, possible high reward for the Bulls and the hometown kid. Even through all the injuries in his NBA career, Parker has upside on the offensive end. Even when his defense was at it’s worst this season, he still managed to make an impact on the other end of the floor. Yet, his benching under Jim Boylen because of needing to improve his defense was a sign that this was not going to work out long term. I am all for sitting someone because of their effort on the court but even upon his return, there was not enough of a difference where I would buy in to his contract next season. Overall, the Bulls were not going to pick up the option and flipped him for an asset.

The Bulls won this trade. After seeing Tobias Harris going to the 76ers, I feel like the Bulls knew they had to do something. Harris was going to be a realistic addition in free agency this summer because the Bulls were not going to be in on Kevin Durant or Klay Thompson no matter the cap space. The 76ers seem to be all-in on keeping Harris around so that makes the field even smaller for the Bulls. They acquired a solid player who could be a good fit with the young core.

Now, the Bulls head into the summer with about $20M in cap space, a probable top 5 pick on the way, and may have found their answer at the small-forward position. And if the Bulls are sold on Dunn at season’s end, you will have your starting lineup for next season with Dunn, LaVine, Porter Jr., Markkanen and Carter Jr.

It’s a start. There is plenty of potential with this group and with reserve pieces like Chandler Hutchison and if the Bulls decided to bring back Shaquille Harrison and Wayne Selden next year ( they definitely should), you are starting to build something somewhat relevant. Oh, and not to mention maybe adding Zion Williamson to this group.