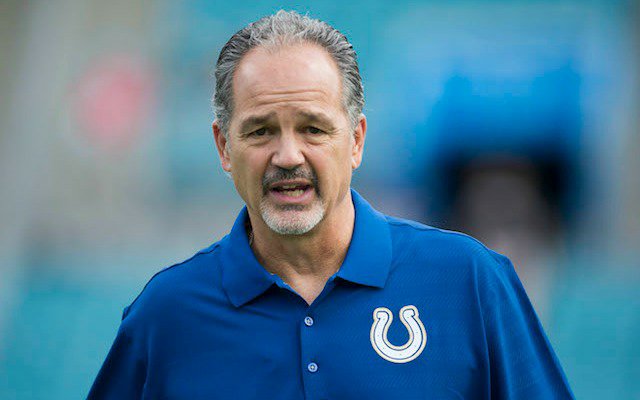 My first thought when the Bears pegged former Colts Head Coach Chuck Pagano as their next Defensive Coordinator this past Friday evening was, consolation prize. Not that Pagano is unworthy but it was clear that if Matt Nagy had his druthers he wanted his good friend and a man Nagy’s father coached Todd Bowles. My second thought was what a perfect fit.

One of the reasons the Bears were so hyper focused on retaining new Denver head man last off-season was to not only keep continuity in place but also to have an experienced, successful and respected coach to coordinate the young talented nucleus of defensive players. This would allow a young inexperienced rookie head coach to concentrate on the offense, as well as, his duties as the team administrator of the on field operations.

Nagy had his plate full building the culture, setting up rules for the team, coordinating the daily routine at Hallas hall, overseeing his first mini-camps as Head Coach, planning training camp and the pre-season, offensive installs, setting up the weekly routines leading up to gameday and ultimately on gameday calling the plays, as well as, managing the entire team. Just to name a few of the main things he had going on. Quite the itinerary to juggle to say the least.

Well, with the Pagano hire, this allows the 2nd year Head Coach to basically leave the defensive phase of the team alone, and confidentally allow his Defensive Coordinator to have full autonomy of that side of the ball while he concentrates on the other aspects of being a Head coach as he did with Fangio. There will also be the second phase of his offensive installation. Now that he knows his personnel better and they each other, he can both add and remove plays based on what his players do well and don’t do well.

Pagano actually adds the extra element of being a former head coach just a couple seasons ago that Fangio didn’t. So if anything Pagano should give Nagy even more confidence in giving that phase of the team over to his coordinator.

Another added element Pagano brings is aggression. Fangio, while being a very effective coach and good teacher sometimes would be a tad too conservative. Not a volume blitzer and routinely at the bottom of the league in attempted blitzes, Fangio would prefer playing coverage flooding the backend with bodies in zones on 3rd downs even sending less rushers dropping both Leonard Floyd and Kahlil Mack into coverage at times. When he did blitz he would be effective with it but even when sending extra men on the pass rush he’d usually send just a single Blitzer generally on a delay up the A gap from one of his off ball Linebackers. Occasionally, he’d send a Defensive Back, 90 percent of the time from the player playing slot on that down.

Pagano goes a different route. When the money downs come up he unleashes a multiplayer blitz choosing to put pressure on the Quarterback speeding up his decision making rather than confuse him with coverage disguises as Fangio favored. Now, Pagano isn’t going to blitz at the same rate as say a Todd Bowles would’ve but he will do it when it counts most and he’ll be creative and send a lot of guys from anywhere and everywhere.

He’ll also play a higher percentage of man as is necessary when sending multiple blitzers from areas that will be left uncovered. It’s vital to get a good jam at the line of scrimmage to disrupt the timing of the routes and allow the rushers to get home and either force a throw quicker than wanted or get to the Quarterback.

Here are some videos of some of Pagano’s blitz packages as posted by Jack Soble the editor and lead Bears writer @TheLoop_Sports who you can and should follow on Twitter at @jacksobleTLS.

Playoff game against the Texans. Both OLBs drop, so the OTs help out the guards on the interior DL. Ray Lewis occupies the center with a blitz into the left A gap, and Ed Reed comes free behind him. 59 does as well. pic.twitter.com/FRpnS6ovTF

Here you can see the creative mind of Pagano at play. Here he send 3 blitzers through the A gap. First sending an inside Linebacker and than a Safety on a slight delay stunting inside and around the now occupied Inside Backer. Just as the safety shoots through the gap unimpeded to the Quarterback he than sends yet another Defensive Back right behind the free Blitzer who actually gets hooked here on what should have been a holding call. The result was an incompletion after the Quarterback was forced to throw the ball sooner than he wanted and inaccurately on the shallow cross before taking the hit.

Here, the Steelers’ OL expects the pressure to come from Terrell Suggs (DPOY that year), so they slide the protection his way. Instead, Pagano drops Suggs and brings the nickel back/Lewis. Once again, the blitz side G/C are occupied, as is the TE, so the nickel gets home. pic.twitter.com/rA9YIXtn7q

Here, Pagano sends an inside linebacker that take the attention of the Right Tackle leaving the Tight End on an island to block two players and has no shot. Ends up not blocking either player and they both get home running a stunt.

When Lewis drops out, the LG thinks “phew, I can help on Ngata and not have to worry about the blitz. The LG thought wrong, because all 3 OL on the blitz side were occupied and no one blocked Kruger, who looped around and snuck into the A gap for an easy sack. pic.twitter.com/a1RncIVaLl

Here is another use of a twist to free up a player shooting through the A-gap and getting the sack. Something Fangio employed a lot for his pressure scheme.

This is another overload concept. 51 showed in the left A gap, so the C has eyes on him. That means the RG has to take the DT. Instead, 51 dropped and 53 came in behind the guard’s back untouched. pic.twitter.com/bd7qkeXwjy

Here is another blitz that simply sends more guys than can be blocked. In this case from the right of the formation with, you guessed it, a stunt and twist 2 man game.

Finally, this is my favorite one. Smith saw the 3 guys on the left side and slid the protection that way. This gave the RG the job of blocking the NT, who drops, and he doesn’t see 93 come in behind him. That left Gore and the RT to block 3 guys. Not happening. pic.twitter.com/kzjmA3IKXi

This is perhaps the most creative blitz of the bunch. They show an overload blitz look on the left side of the formation which the Quarterback recognizes and alerts his linemen to setting the protection to that side. At the snap that group drops off into coverage and the 3 from the other side come leaving the Running Back with the decision to block one of two rushers and ends up blocking neither.

Nagy appears to have a kindred spirit in Pagano. Both are creative and aggressive play callers and are very inspirational speakers. Fangio was a little more reserved. Will two of the same type of personalities be a good working combination? We’re going to find out in a little over nine months.