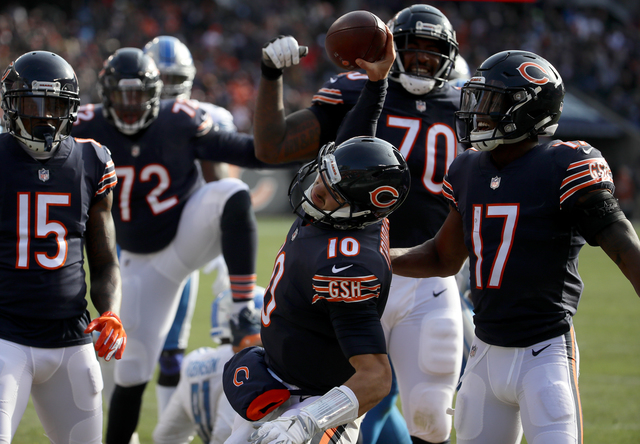 For the first time since Halloween night in 2016, the Bears have won a divisional game.

First, it’s embarrassing it has taken this long. But it’s a testament to general manager Ryan Pace for flipping this roster and hiring Matt Nagy to bring along Mitchell Trubisky. The Bears are having bountiful success this season due to a top-ranked defense, unlimited weapons on offense, and a quarterback who continues to develop and gain familiarity in the offense.

When was the last time Bears fans were this excited about their team along the lakefront? The Bears will host the Vikings on Sunday night football this week and it’s the biggest game at Soldier Field since the 201 NFC Championship game. The atmosphere is going to be wild and it should be a really good game.

But before we jump into next week, let’s dive into the 34-22 win over the Lions on Sunday, shall we?

Thomas’ takeaways from the Bears rolling to 6-3

305 quarterbacks in Chicago Bears history have attempted 30 passes in a game, but none have had a higher rating that Trubisky in the win over the Lions.

Trubisky played his best game of the season according to coach Nagy, completing 23 of his 30 pass attempts for 3 touchdowns and a 148.6 rating. I have to agree with Nagy here. Even though he threw six touchdowns earlier this season versus the Buccaneers, Trubisky played like a seasoned veteran on Sunday. No turnovers are always big when you talk about a quarterback’s performance and Trubisky did not even come close to throwing one. He made some spectacular throws, one being a 36-yard touchdown to Allen Robinson, and continues to make plays with his feet when needed.

I always like looking at the NEXTGEN stats for Trubisky. First, it totally destroys the narrative that he cannot throw to his left. Second, the Bears are spreading the ball around to multiple weapons and have plenty of play calls attacking the middle of the field and those “in-between zones” in zone coverages.

Trubisky is coming along. The growth from Green Bay to now is significant. He is more comfortable in the offense and his biggest weaknesses, pocket presence/awareness, are noticeably better. In terms of the scheme, Trubisky is doing a solid job going through his reads and noticing the matchups. There are plenty of times on film this year where Trubiksy missed open receivers. And there are some forced throws too. But the second-year starter is taking control of this offense and getting Allen Robinson II back last week in practice and on game day is going to make his job a lot easier.

Allen Robinson and Anthony Miller had big days, combining for 255 yards and 3 touchdowns.

The Bears made it a priority this offense to surround Trubisky with weapons. The quarterback’s own development is just as important as giving him men to throw to. Last season, Trubisky had a shaky group of receivers. Josh Bellamy, Kendall Wright, Markus Wheaton, and Dontrelle Inman is not going to get you far in this league. Bellamy is a solid player who also has an impact on special teams and Wright is a decent veteran, but it was a glaring need as the Bears headed into the offseason. Signing Robinson, Taylor Gabriel, Trey Burton, and drafting Miller was a complete 360 from last season and changed the offense.

Robinson finished the day with six grabs for 133 yards and two touchdowns. One thing to notice with Robinson is that he wins at the line of scrimmage. On both his touchdown grabs, the former Nittany Lion gets the defensive back off-balance and then beats them with speed opening up a window for Trubisky. After missing the previous two games, Robinson looked healthy and he played like it.

On the other side, Miller caught 5 passes for 122 yards and one score. His touchdown came on a busted coverage and he capitalized. Miller’s 4.4 speed was on display at Soldier Field on Sunday too. His role in the offense increases every week and his tape shows why Pace moved up to draft him. And if the Bears continue to roll with just four receivers from now on, his production will continue to go up.

With three more takeaways on Sunday, the Bears defense added to their already impressive resume. Vic Fangio’s unit leads the NFL in interceptions (16), tied for second in forced fumbles (12), 5th in sacks (30), and their takeaways margin sits at +13, the best in the league.

First-round draft choice Roquan Smith led the Bears in tackles for a second straight week and picked up the third sack of his rookie season. With all the attention on Mack, Smith has been that silent assassin. He gets the job done play in and play out and is going to be a special player. I think we need to be talking a lot more about Smith because he does special things on the field.

Bryce Callahan and Prince Amukamara each had an interception in the win and played great games. Callahan had 5 tackles, 2 passes defended, 1 sack, and 1 interception. In a contract year, he’s playing as good as anyone can. And his fit in Fangio’s scheme is a perfect match. As for Amukamara, the 29-year-old had 8 tackles, 2 forced fumbles, 2 passes defended, and an interception. Everything is working for this Bears defense and they will have a big test when the Vikings come to town.

Leonard Floyd picked up his first sack of the season and his first since last November vs. Green Bay.

Floyd was hyped up to be the leader of the group this offseason before Mack showed up. And due to a very slow start, it backed up the aggressive move to bring Mack to Chicago.

There is a lot of chatter surrounding Floyd if he is a bust or not. Being a former top-10 pick, there are high expectations set by the team, fans, and analysts. Now, Floyd has not had a bad season. He plays a big part in the run game and can be effective in pass coverage. But until Sunday, he failed to get to the quarterback. QB hits show up on the stat sheet but sacks earn the pay raise.

Could this start something for Floyd? The Bears are going to need him at his best when Kirk Cousins and a dangerous Viking offense comes to town. And it’s not like Floyd can do it. His speed and athleticism off the edge is why the Bears drafted him. It’s going to be something to watch for the remainder of the season.

The kicking woes were at it’s highest as Cody Parkey hit the upright four times, keeping eight points off the board. It was something to watch. I’ve never seen anything like it.

In September of 2016, the Bears parted ways with Robbie Gould, their all-time leading scorer. Gould struggled that previous season, missing six of his final 24 kicks. And a shaky preseason did not help his cause. The Bears decided to move on and signed Connor Barth after final cuts. Two years later, it was obviously a mistake. The Bears have not had consistency since and Gould continues to defy father time. He has missed just three field goals since his release with the Bears.

Nagy was quick to answer after the game that the Bears will not be searching for another kicker when asked if they would try out kickers this week.

My take: Parkey had a rough day. Everybody has those, just like Nagy said in his postgame press conference. But the Bears invested quite a bit of money in Parkey and there are going to stick with him. It’s not easy kicking in the NFL and especially at Soldier Field with the swirling wind. I don’ know what Parkey and the staff is going to do to fix these issues but it has to get fixed quickly. Come playoff time, you cannot leave points off the board. And if the Bears want to win close games and have faith in Parkey when the game is on the line and a 50-yard field goal attempt will win it, your kicker needs to be consistent.