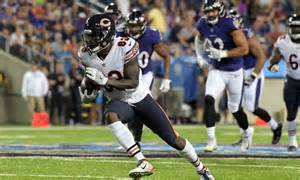 Perhaps the most amazing part about this season and the roster battles are there really aren’t a whole lot of battles going on. For a team that’s had the second most losses in the NFL the past 4 seasons, second only to the Cleveland Browns you’d think there would be all sorts of jobs on the line. Especially with a new head coach aboard, but no. There simply aren’t that many roster spots available.

This sort of speaks to the bad luck the team has had with injuries more so than a lack of talent that was the main reason for the past records. While they haven’t had Championship type rosters loaded with blue chippers they still had enough talent to win more than they have. There’s also the fact the Bears have added a lot of new faces in Free Agency and a highly regarded draft who have secured roster spots along with the incumbents.

It should also be noted that the Bears are likely to find players off the waiver wire to fill needs particularly at Outside Linebacker as I detailed in a previous article which you can read here. The Bears have lucked on a couple late waiver wire cuts in the past that ended up starting in Pro Bowls in the names of Josh Sitton and the pre Jay Cutler/Lovie Smith Bears era in Ruben Brown. So there is the possibility the Bears can luck on a star for this team even as late as this. For now, I can only go by what they have as far as projecting who makes the team or not. So with that I’m going to attempt to play Bears General Manager and set the 53 man roster and an eight man practice squad.

No surprises here. The biggest news may be with the Bears depth chart. Looks like Robertson-Harris has the starter  gig opposite Hicks at Defensive End over Bullard. Nichols and Jenkins will battle for snaps during the season spelling Goldman.

How well Floyd plays with a club on his broken hand remains to be seen but he will start game one against Green Bay and the Bears will be counting on him heavily to generate some pass rush off the Edge. Acho is a steady performer and is a better pass rusher than people get him credit for. It still remains to be seen if Lynch will be able to stay healthy. I still think there’s an outside chance he gets his roster spot replaced from the outside. Fitts and Irving have had impressive camps and their two last preseason games have been especially impressive. Particularly Fitts’.

I’m still not 100% sure Timu gets cut, but I do think they have a solid top 3 in Trevathan, Smith and Kwiatkoski. Iyeigbuniwe is a work in progress, but has the raw potential to be molded into a quality backup.

Thought to be a weakness just a year ago now is considered a strength. Perhaps the team strength. At least on defense. If Fuller and Amukamara can repeat last seasons performance and add some picks to the equation they may both very well find themselves in pro bowl consideration. Callahan may be the best Nickel Corner in football. If only he could stay healthy. LeBlanc has had a strong camp and McManis is a core special teams captain who actually proved to be of worth to the defense in a special blitz package devised by Vic Fangio last season.

Jackson and Amos look to expand upon their resumes with a follow up performance from last season. Perhaps even taking it to the next level. Bush and Houston-Carson are young up and coming rising reserves with Houston-Carson contributing magnificently on special teams. Hall has gotten in trouble with the league and was levied with a one game suspension violating the league’s drug policy, but has played so well in camp that I feel it won’t be his demise and he will make the 53 man roster.

There are some that believe the Bears will only carry two Quarterbacks. However, if this is supposed to be about giving Trubisky everything he needs to succeed keeping another pair of eyes and voice around to help him master the offense is what they’ll do. In practice, the film room and on gameday. That’s why I feel they’ll keep Bray around.

Despite what Matt Nagy has said it appears the starting five is set with Leno, Kush, Whitehair, Long, and Massie going left to right. Daniels joining the starting five is merely a when not if scenario. It also appears Center will be his spot once that does happen. Some Bears won’t like this as they seem to have an irrational hate for him but it’s looking more and more like Grasu is coming back. Especially after they cut Earl Watford. Coward has been extremely impressive and it appears his learning curve has been drastically reduced from his conversion from Defensive Line to Offensive Line. So much so I believe the Bears will be comfortable enough cutting Sowell and making Coward their swing Tackle.

The top four of Robinson, Gabriel, Miller and White was pretty easy to come up with. Wims played his way on to the 53 man roster. No way he makes it back to the Bears if he gets waived. Bellamy is a core special teamer and a team captain who I believe will be used in the offense to open up space and provide a deep threat on offense.

A couple surprises here if my prediction comes to pass. The top two of Howard and Cohen were a lock of course by no one would have predicted Davis and Nall would make the 53 man roster. Davis is familiar with Nagy’s system and Nall is multi-versatile and shown he can even play some Fullback. Plus, like Wims, looks like he’s played his way on the roster as I doubt he’ll make it through waivers to be placed on the practice squad.

This is another one of the Bears deeper groups. Burton and Shaheen appear to be the making of a dynamic duo. Sims is the Bears specialty blocking Y, and in a bit of a surprise Braunecker edges out Brown for the 4th spot.

No surprises here. Parkey was a big Free Agent signing and looks to stabilize the Kicker position after a very rough stretch since cutting Robbie Gould. Even in Gould’s last season it was pretty bad. O’Donnell keeps his job as well as the dependable Scales as the teams long snapper.

The Practice squad might actually be stocked with more players from other cuts around the league than their own bubble players so this list should be taken with a grain of salt. I feel these are the eight players most likely to be considered off their current roster however. Morgan is eligible for the practice squad and a fifth rounder just a year ago. If he makes it through waivers it’s a good bet he makes the practice squad. Mincy was someone the Bears specifically sought out and brought over from Canada and he does have special teams value and explosive athletic traits. Thompson I feel is being groomed to be Sims replacement next year. Anderson looks like a good bet to eventually replace Jenkins as a tough inside player who has shown the ability to factor in the pressure side of the game. Allen is a big athletic tackle who has enough upside to be the Bears swing Tackle when Coward takes over Massie’s spot next year. Grant has shown the ability to get picks which is huge for this team. Gentry has had another impressive camp and the Bears thought enough of him to have him in another camp for the team. Tolliver has had a rough preseason but has enough size and athleticism to be developed into a perfect press corner in Fangio’s scheme.