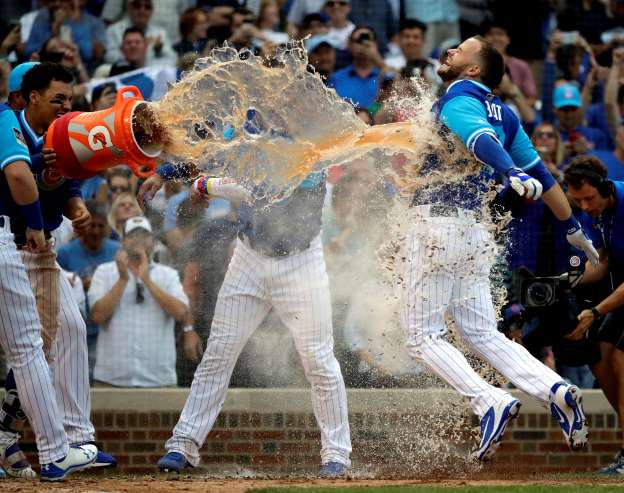 The Chicago Cubs wrap up their August with a three-game set against the New York Mets and then the start of a long road trip that starts with a makeup game in Atlanta. With one more month to go, the Cubs hope they can continue to maintain a healthy lead in the NL Central and hopefully clinch in the final weeks.

Despite the St. Louis Cardinals being hotter than the Sun the past month, the Cubs went into Monday with a 4.0 lead over them and a 4.5 lead over the Brewers. The team controls its own destiny, they play solid ball throughout the month of September and they win the Central for the third straight year. Probably the biggest games from a division standpoint are the two series against the Brewers, a total of six games. But, one thing at a time, they want to finish strong in August.

After a massive hitting slump, the Cubs have been on the offensive as the hitting has returned and have gone 5-1 in their last six. Granted it was against two struggling teams in the Tigers and Reds, but good teams have to win the games they are supposed to. Daniel Murphy since joining the Cubs has a hit in every game and two home runs and the team totaled 37 runs from last Wednesday’s game to Sunday’s game. One of the highlights everyone is talking about is the 481-foot home run MVP candidate Javy Baez hit at Wrigley Field Thursday night.

Speaking of Javy and MVP candidate, the young infielder continues to make a great impression. Going into Monday’s game, Javy has the fifth-highest fWAR in the National League. He also has the seventh-most home runs (28), third-highest slugging (.575) and most RBI (97) in the NL. Even if he does not win the MVP award, looks very likely like Nolan Arenado right now, he absolutely has to be in consideration as he is having a fantastic season.

Lastly, we have to talk about David Bote. After a slump in recent weeks, the 25-year old rookie batted .333 in his last five games before Monday. His dramatic walk-off home run on Friday against the Reds capped another heroic performance for Bote. So, since he is playing so well, does he deserve a spot on a potential postseason roster?

A potential role for David Bote in October would honestly be as depth, unless there is an injury. While he is playing mostly everyday now, that will change when Kris Bryant comes back. There is no way Bote starts over a healthy Bryant. This is no knock on Bote, but he is still young with little experience in the majors while everyone else has tons of postseason experience. He can continue to be a productive weapon off the bench no doubt.

670 the Score reports that the Cubs will be dropping their partnership with NBC Sports Chicago in October of 2019 to start their own network. This is something that has been talked about for many years, and it looks like it will finally happen. Former MSG Network president Mike McCarthy will lead the way with this new network.

Sources: #Cubs will go their own way in a television venture starting in late 2019, ending partnership with NBC Sports Chicago, Bulls, White Sox and Blackhawkshttps://t.co/vc8sD0Arz7 via @MLBBruceLevine pic.twitter.com/CKSfecwJmi

Cubs are now following the Dodgers and Yankees footsteps with the creation of their own network. This, as many people know, can generate massive revenue for the team. No real details about the future network are available yet, but at least we know it is happening.