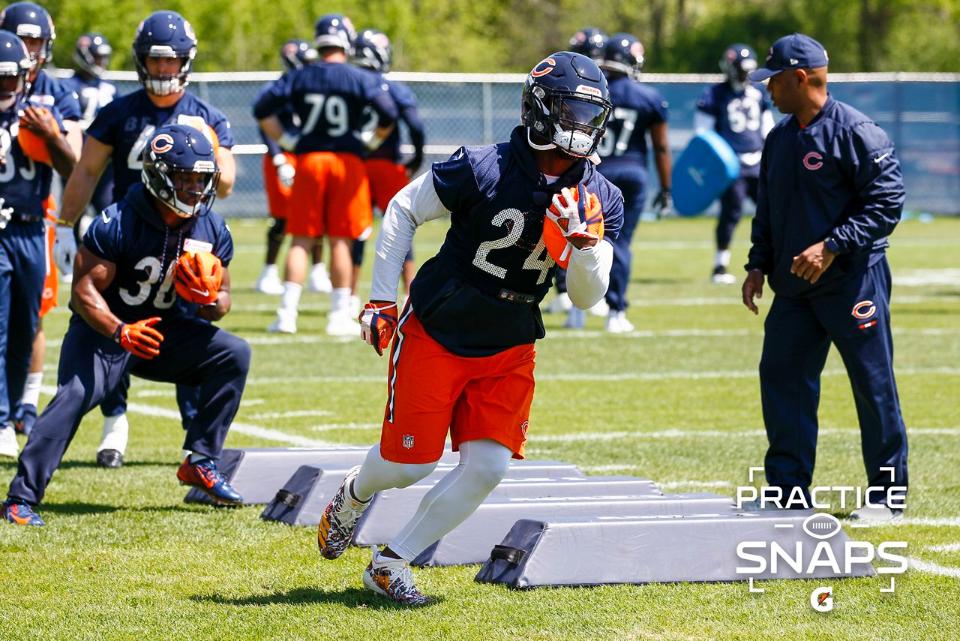 When the Bears begin training camp for real in late July all eyes will be pointed towards Mitch Trubisky and the Bears passing game and rightfully so as Trubisky is the single most important entity on the Bears roster. He was the guy the Bears gave up valuable draft inventory for to move up a single spot to draft. He’s the guy the Bears hired a head coach for that gives him the best chance to develop under in Matt Nagy. An inexperienced but offensive minded and young head coach to be more relatable to Trubisky. Oh and let’s not forget that he’s a former Quarterback himself. He is the guy the Bears spent big money on in this off season’s free agency period to surround him with experienced and proven weapons. He is the guy they used two 2nd round picks on including trading back up into the 2nd round to get the extra pick on another offensive weapon not to mention two other players last year that figure to be key weapons in Trubisky’s arsenal. It’s clear the Bears focus was on increasing the odds of Trubisky’s success as it should have been.

While it’s true that the hopeful ascension of Trubisky and the success of the passing offense is what will  put the Bears offense on par with the leagues best and into elite status, it’s the Bears running game that will be the foundation on which all of it is built. With a Poor foundation it all comes crumbling down. The key to everything especially early on while the team learns the intricacies of the passing offense is a productive running game. All the things Bears fans have been clamoring for and the trends of the league like RPO’s, misdirection, jet sweeps, Play action, all of it is made harder if the running game is not effective. Both for deception and in down and distance situational play calling.

It all starts with Jordan Howard of course. He’s the featured back, the bell cow if you will. He’s the main between the tackles runner and the power back. However, don’t confuse him for being that big plodding Back. Howard has some juice. He can make you miss as much as run you over as this PFF tracked stat shows you.

Through the first four weeks of last season, Jordan Howard was among the league's best in breaking tackles pic.twitter.com/GHjou5tyJB

He was also among the top backs in explosive runs (20 or more yards) accumulating 14 (11 – 20+/3 – 40+) ranking 2nd only one behind Kareem Hunt. Only 5 Backs had 10 or more such runs last season with Mark Ingram, Bilal Powell, and Kenyan Drake rounding out the top 5.

As for Howard’s primary backup Tarik Cohen figures to get more action this season with an expanded role running the ball according to Matt Nagy. Of course there’s a qualifier. He has to show them he can block better. Last season Cohen was only in on 6 pass blocking downs when in the backfield. This would help with the unpredictability factor as teams can’t key in on pass if Cohen is in the backfield. He’ll have to be respected as either a running threat or a primary receiving option or even as a secondary blocker to cripple the blitz game. Of course even as an obvious passing threat the Bears could use that as a decoy but there is only so many of those bullets you can use before these smart defenses eventually catch up to it.

Tarik Cohen was a big-time receiving weapon for the Bears as a rookie. pic.twitter.com/8GAB0LBkx4

Cohen’s impact as a receiver is undeniable. In this area there is little doubt he will continue to grow and improve and become an even bigger impact player. Last season appears to be just the beginning. If Cohen never materializes into a good enough blocker to get an expanded role as a Running Back he will certainly get plenty of snaps as a receiver. He may have had an even bigger impact last season if Trubisky wasn’t so raw along with the combination of Cohen’s own learning curve coming from a division II school. Not to mention as the season went on and the Bears lost weapon after weapon to injury he was pretty much the defense’s primary focus as a receiving threat. Especially on obvious passing downs. However, when the ball is in his hands he’s a threat for a big play in any way he gets it as this PFF chart below shows.

Tarik Cohen was a breakaway threat in 2017! pic.twitter.com/w3wBNaQWfw

Cunningham brings experience and can contribute in multiple ways. He can run the ball a little bit as he averaged 5.6 yards a run as a Rookie with the Rams, but is more of a specialist on passing downs as both a receiver and a blocker. However, his main claim to fame is his special teams play as both a returner and in coverage. In that regard he holds tremendous value as he contributes in a couple of phases on offense and all phases on special teams. This versatility allows the Bears to make room on the roster for other bodies rather than having to keep someone because they need a gunner or a 3rd down back.

Speaking of third down backs that’s a role Mizzell can play in this offense. He may very well be competing with Cunningham for a roster spot so he has to ball out on special teams to ensure a spot. As I mentioned earlier they both might make the roster. The Bears had to be pretty excited to get him last year off waivers as he brings a lot of juice with him and would appear to fit this offense quite well. At Virginia he was the only player in ACC history to collect 1,500 yards both receiving and rushing. He’s also the ACC leader in receptions by a Running Back with 195 which also ranks 2nd all-time at Virginia from any position group.

In a draft class loaded with Running Back depth this past draft season the Bears waited until the draft was over to acquire one from this possible historic class. A pretty good strategy considering the value they would get from him. The Bears already have great value at the position paying Cohen a 4th round Running Back’s salary and an even cheaper price for Howard with a 5th round salary. Cunningham has no disclosed amount reported as of yet and Mizzell getting a UDFA contract if he makes the roster. The perfect way to play the Running back acquisition game. You can always find cheap labor at Running back while getting massive production allowing you to spend at other premium spots.

Getting back to Nall.  He has great size for a Running Back standing 6’2″ and weighing 232. His production is still impressive after initial contact is made. This makes him a load to tackle as this PFF chart shows.

New #Bears RB Ryan Nall was hard to bring down, especially in 2016, when he averaged 5.03 yards after contact per rush pic.twitter.com/Uq9i9pWebG

Although he’s a big guy don’t confuse that for slow and unathletic. He brings much more with him than power. He has some shiftiness in his arsenal as you can see from any of his highlight video cutups. On this one you see both his ability to catch passes out of the backfield and his elusiveness in the open field.

Ryan Nall isn't easy to tackle when he catches the ball out of the backfield. pic.twitter.com/uaBNuOmi6F

Nall had a split role in college and was never a featured back so his bottom line stats are not as impressive,  but his output considering the amount of his opportunity is. His college career numbers are as follows. In 3 seasons totaling 30 games he had 385 total rushes totaling 2,216 yards averaging 5.8 yards a carry with 24 Touchdowns. He caught a total of 56 balls for 563 yards for a 10.1 average per catch and 4 Touchdowns. Some in the draftnik community think he’ll be converted to move Tight End, but he is currently listed as a Running Back on the Bears roster so looks like they want him to stay put for now, but don’t rule it out. He runs routes and catches the ball well and is the right size to play the U Tight End position in Nagy’s offense.

While it is true that the biggest key for the Bears to make the ascension to the top of the charts as an offense is the development of Trubisky as I mentioned earlier in this piece, but that will not happen without the running game hitting on all cylinders. Aside from a stout Offensive line there is no better protection for a Quarterback than a strong Running game. It puts the split second doubt in the minds of a defense of whether to play pass or run considering you consistently stay in a 3rd and manageable situation. Even more preferably stay out of 3rd downs as much as possible. A good running game helps to accomplish that. It also helps your play action and misdirection plays have the proper effectiveness to put defenders out of position to make plays. So while being fixated on the passing Offense don’t forget to pay attention to the Bears running game with equal interest. Because that 40 yard strike on a go route up the seam to Trey Burton may not have happened if not for the play action causing the Linebackers to freeze because of the 7 yard run through the B gap the play previous.