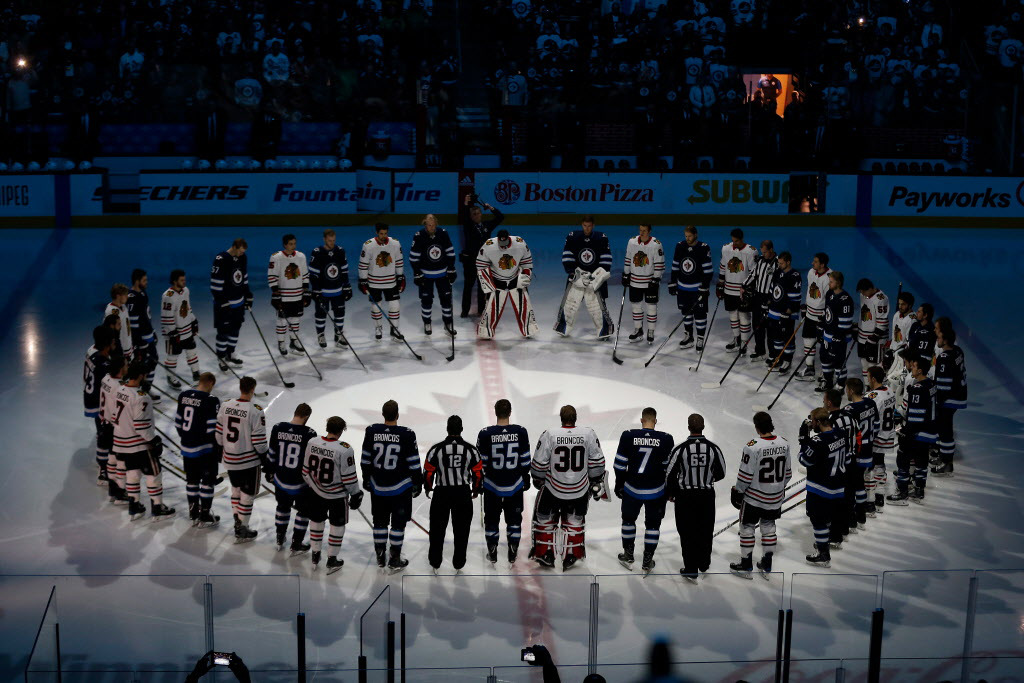 Last night, the Chicago Blackhawks ended a tumultuous season with a whimper, losing 4-1 to the Winnipeg Jets.

Here are some highlights:

Before the start of the game, the Blackhawks and Jets organizations tweeted out that all the players will wear the name “BRONCOS” on the backs of their sweaters for the duration of the game, in honor of the Humboldt Broncos of the Saskatchewan Junior Hockey League.  The Broncos were on their way to play game 5 of a semifinal series with the Nipawin Hawks when a semi collided with their team bus.  The accident claimed 12 Broncos players, the head coach, the play-by-play announcer, and the driver of the bus.  Both teams, along with the NHL, also announced that they will donate $25,000 each to a fund established to help the victims and their families.

After warm-ups, all players from both teams gathered on center ice for a moment of silence.  They all formed a circle around the Jets logo while both national anthems were performed.  It was a poignant and powerful tribute to the Broncos, as well as a testament to the resilience of the hockey community as a whole.

Jets went to work, Blackhawks did not

The Jets, looking to enter the playoffs on a high note, made quick work of the Blackhawks.  The Blackhawks were playing a sound defensive game in the first period up until they took two early penalties.  With the Hawks down two men, Dustin Byfuglien converted for the Jets.

The second period saw some really sloppy defensive play from the visitors, resulting in three Jets goals within a span of six and a half minutes.  Brent Seabrook did answer one of them, a slapper that got past a screened Connor Hellebuyck.  Nobody tallied in the third period, although the Hawks did have a slight advantage in shots on goal, 14-13.

Jeff Glass acquitted himself well during the game, considering the lack of support up front.  He saved 35 out of the 39 shots he faced, ending up with a .897 save percentage.

The Blackhawks ended the season with a 33-39-10 record, their first losing record since the 2006-2007 season.  It is also the first upside down season of head coach Joel Quenneville’s career.

The Jets also celebrated Patrick Sharp’s last game in the NHL, displaying his face on the scoreboard during a stoppage of play in the third period.  Sharp, who was born in Winnipeg, formally announced his retirement after the Blackhawks’ final home game last Friday night.  He was treated to a standing ovation by everyone attending the game.

Blackhawks defensive prospect Dennis Gilbert and his Notre Dame Fighting Irish were denied a NCAA title last night, losing to third seed University of Minnesota-Duluth Bulldogs 2-1.  The Irish went down 2-0 in the first, and picked the wrong time to not come back from the deficit, as they often did during this season.  It is still unknown whether Gilbert will return for his senior season or if he will turn pro.