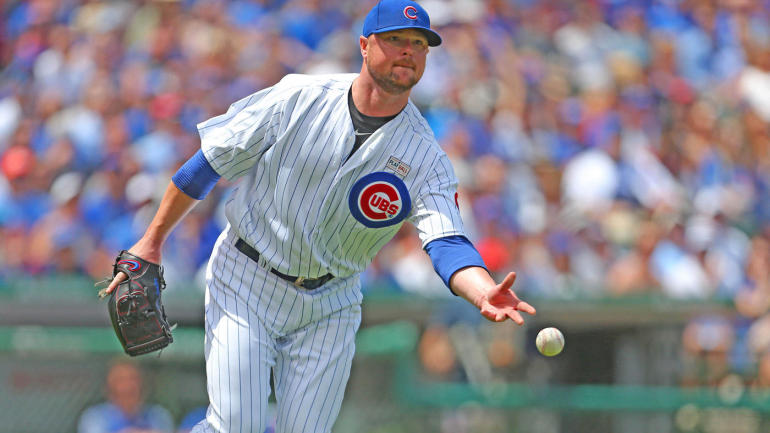 Jon Lester will enter his 13th year in the majors and his fourth with the Cubs, which is hard to believe. His reputation as one of baseball’s best lefty starters and an all-time postseason great spans over his career in both Boston and Chicago. Yet there are still conversations about his ability to throw over to first base.

His struggles to do so have seen him use some strange methods to get the ball over to first base. This includes “bowling” it over to first, tossing the glove with the ball inside to first and most recently using a “Jordan-to-Pippen” bounce pass. That was used in his most recent spring start against Arizona and it is getting attention on social media.

Jon Lester's throws to first base are actually in mid-season form already. 😝 pic.twitter.com/Y4fmT2izXy

Lester has taken some heat for his struggles to throw to first by media and fans, and every time he starts there is always this talk about how the opposing team is going to toy with him on the bases. At the end of the day, his throwing to first base has never cost the Cubs in a big situation. Lester is such a talented pitcher that if something goes wrong on the bases, he has been able to escape damage. Not to mention baserunners “toying” with him can just cause irritation for the batters, and it clearly has not bothered Lester.

In fact, his three errors as a Cub all came in 2015, so he has not made an error in two seasons. He has as many pick offs (3) as he does errors in a Cubs uniform. Lester’s throwing to first is something nobody will ever understand, but he is a career 3.51 ERA regular season pitcher and a 2.55 postseason pitcher with three rings and four All Star nods. He does not let his throwing to first get to him and it should not even be a major concern among fans.