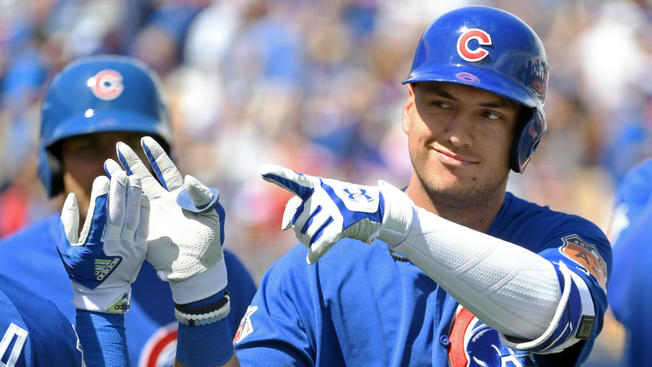 I really believe Albert Almora Jr. is our next top prospect to turn into a star. Do you know of who he reminds me of? Manny Ramirez . His glove is getting better every year and his confidence continues to grow.

Almora has taken a big leap since coming up from the minor leagues in 2016.  During the 2017 offseason, the Cubs signed Jon Jay to a 1 year deal. Almora handled it like a pro, and learned a lot from him last season.

Struggling with right handed pitchers, Almora found himself sat for Jon Jay. Almora started vs the lefties and dominated them.

Last season, he hit .298 with 8 Home Runs & 46 RBI’s; also a slugging percentage of .445. By his pitch breakdown, he makes contact with a lot of fastballs and sliders.

Almora shined last season, and I hope this year he keeps growing as a player & outfielder. He dominance vs left handed pitchers is amazing. Now, the focus turns to playing against right handers and if he can figure that out, he could be on this team for a long time.

This team is plenty young.

During the postseason last year, he showed flashes of being a centerpiece for the Cubs hopeful dynasty run.  He may have had an off series in the NLDS vs the Washington Nationals but he had a couple of hits, one being the RBI in game 3 to tie it up in the 7th inning.

In the Dodgers Series, his highlight came in game one, hitting a 2 Run homer vs Clayton Kershaw in the NLCS. He’s becoming a nice weapon for Joe Maddon, but the Cubs hope he can become a weapon they could play everyday.

In my opinion, Almora should be the Opening Day  center fielder for the Chicago Cubs. He could potentially be a great asset to them this season and beyond.