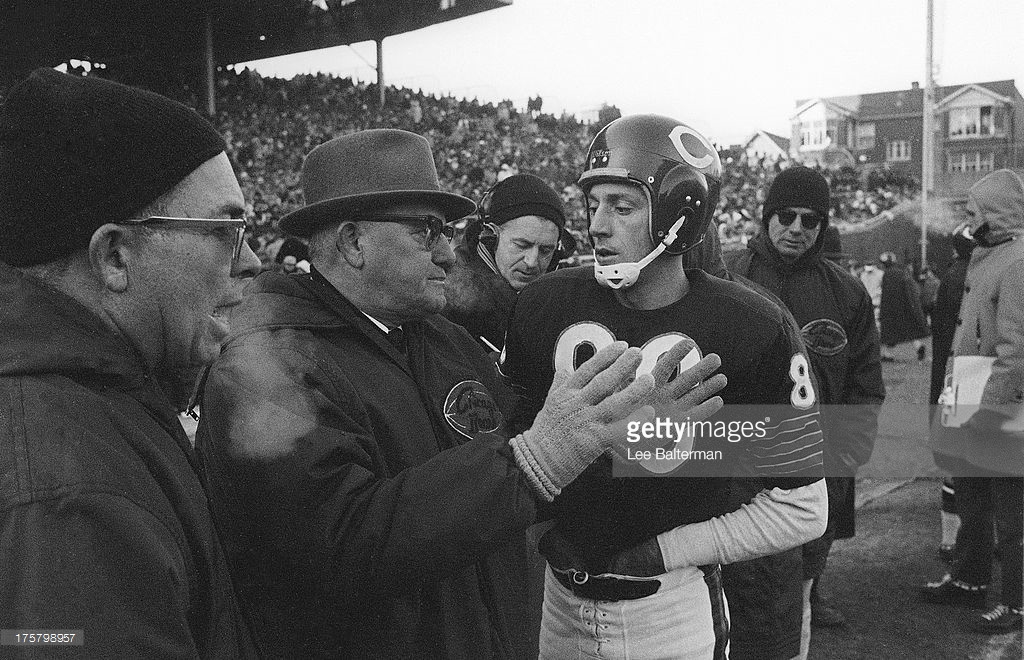 Once upon a time, the Chicago Bears were one of the greatest forces to be reckoned with in the NFL. They had numerous Hall of Fame players under the legendary George “Papa Bear” Halas. Before the Super Bowl era, the Bears had won eight NFL Championships under Halas, the last one being in 1963.

The NFL Championship game was held at Wrigley Field, where the Bears played at from 1921-1970 on December 29, 1963. They faced Y.A. Tittle‘s New York Giants on a bitterly-cold Sunday which the official game time temperature was four degrees. And now time to revisit that day. A special reel of game footage taken from my grandfather, Joseph Patt, that day from his season ticket seats in the temporary bleachers near the north end zone will take us back!

The first shots of the footage include the pre-game warm ups on the field. The Bears began stretching in the north end zone, right where my grandfather was sitting. At 0:24 you can clearly see Mike Ditka doing his warm up stretches. Then you start to see zoomed in footage of the Giants warming up. Note the old blue and red warm up vests the Giants are wearing, those had been a staple look for the Giants for a long time. Then you get to see the teams doing warm up drills while running simulated plays. No helmets during those drills, still wearing vests and hats.

Right before the game starts, the marching bands come out of the old Wrigley tunnel down the left field line. Cannot imagine they were too comfortable being out in the bitter cold while carrying instruments. The next shot shows the Bears taking the field in uniform. The following guys (in order) run out in this shot: #63 Bob Wetoska, #89 Mike Ditka, #84 Bo Farrington, #28 Willie Galimore, #47 Johnny Morris, #34 Joe Marconi and #9 QB Billy Wade.

The game begins and at 2:26 the cold crowd at Wrigley Field goes crazy as the Bears score a touchdown. This was Billy Wade scoring on the QB sneak in the first quarter to tie the game at seven. You can see Joe Marconi putting his hands up in the year as Wade scored. Bob Jencks added the extra point.

Much of the following footage is of the Bears defense, which was one of the best in franchise history that year. Go to 3:14 of the video and you can see FB #29 Ronnie Bull fielding a kick and returning it after a slight bobble on the initial catch. Then we get some more offensive plays with Wade’s offense. Cannot tell who he is throwing to, but there are some clear shots of him taking a snap and throwing on the run. At 3:43 there is a good shot of what appears to be Bobby Joe Green punting.

The shot of the scoreboard is at halftime, as it was 10-7 Giants when both teams headed back to the locker rooms. Then the enthusiastic crowd cheers as the camera pans back to Wrigley’s green scoreboard to show the Bears had scored to make it 14-10 in the third quarter. The last shots of the game are of the Giants desperately trying to take the lead back, but the Bears defense stopped them. The Bears win it all by a score of 14-10! The team then heads back to the locker room to celebrate. All this ending with my grandfather waiving his Chicago Bears pennant in celebration.