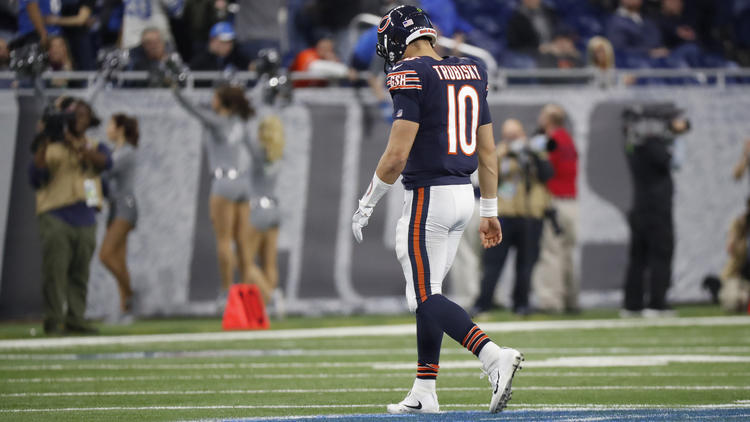 The Chicago Bears have clinched last place in the NFC North. John Fox is 3-17 in the division. Also, the Bears have lost 10 or more games for a fourth straight season. It’s hard to be a Bears fans right now.

The Bears go from their best offensive game in Cincinnati to one of their worst this season in the 20-10 loss in Detroit. And most of the blame falls on the offensive coordinator Dowell Loggains.

Good to see the young guy throwing it around. Turnovers are part of every rookie QBs development.

After having success running the ball with Jordan Howard in the shotgun versus the Bengals, the Bears abandoned that part of the offense versus the Lions. How can you do that? It amazes me. And where was Tarik Cohen? He only played 36% of the offensive snaps. Waste of talent.

It makes no sense. How do you not get one of your best players on the field? Loggains seems to have no game plan either. He just picks random plays on his play sheet.

What you've seen today (once again) is a Bears team that's just not sharp with the details.

There is not of a whole lot to talk about from Saturdays loss. It is the same old stuff we have been saying this entire season. The Bears are undisciplined, and out-coached almost every week and fans are just counting down the days until New Year’s day when the search for a new head coach begins.

Onto next week, the Bears host the Cleveland Browns on Chirstmas Eve in what will likely be a close to deserted Soldier Field. The Browns have yet to win a game but given the Bears effort and coaching, it could be a very ugly game on Sunday.

Why do I give the Browns a chance? We thought the Bears could handle the 49ers with Jimmy Garoppolo making his first start for his new team. Instead, the Bears secondary had a tough day and Robbie Gould beat his former team all by himself.

It could be the same story on Sunday. We have no confidence in this coaching staff to get this team ready and Loggains to get the playmakers on the field. It’s a harsh reality we are living in but it’s almost over.