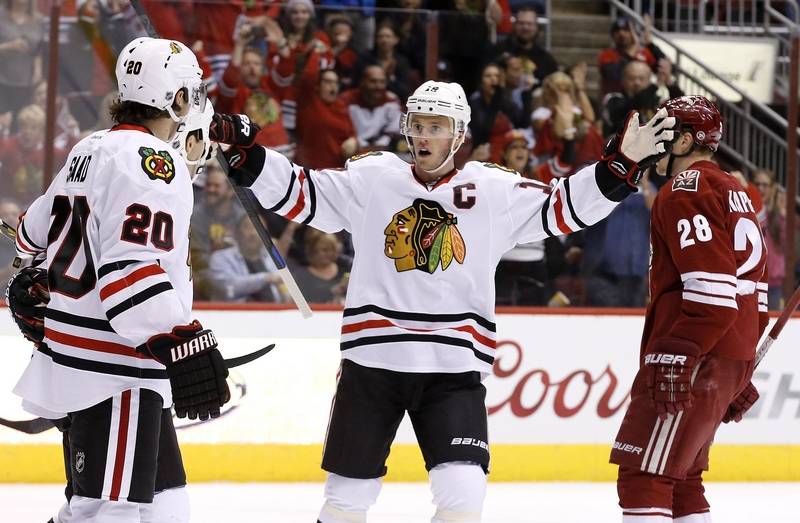 The Chicago Blackhawks broke their two game skid tonight, gritting out a 4-2 victory of the Arizona Coyotes.

The Yotes actually started the scoring, with Chicago native Christian Fischer tallying the first goal of the night.  The Hawks responded a minute later on the power play, with Richard Panik redirecting a shot from Jonathan Toews.  The Blackhawks took their first lead of the night in the middle of the second frame, when Toews sprung Patrick Kane on a breakaway, who went forehand-backhand, burying the puck past Coyotes goalie Louis Domingue.

The Hawks could have had a 3-1 lead in the second courtesy of a penalty shot by Wilmette native Tommy Wingels, but it was nulled because Domingue touched the puck with his stick on Wingels’ attempt.  The Yotes capitalized with a 1:45 left on the frame, with Clayton Keller burying a rebound past Corey Crawford.  Lance Bouma  took the lead back for the Blackhawks with four and half minutes left on the third period, scoring his first of the year and as a Hawk.  Wingels, in a bit of poetic justice, sealed the deal with the empty netter.

Crawford was, as per usual, great on net.  He turned away 27 out of the 29 shots he faced.  The Blackhawks improve to 5-2-1 for the young season.

A masterclass in PK

The brightest spot in tonight’s game has to be the penalty kill.  A series of penalties led to a five minute penalty kill, three of which where the Blackhawks were in the wrong end of a two-man advantage.  The Hawks, who started the night tied for eight in the league on the PK, turned in a remarkable performance, limiting the Coyotes to ONE SOG the entire five minutes.  At one point, Jan Rutta, Connor Muprhy and Brent Seabrook were ALL in the box for Chicago, but the PK unit held strong, killing two other man-advantages that they faced in the third.

The “energy” line provides the boost

The fourth line of Bouma, Wingels and John Hayden continued to supply much needed energy for the team, as well as minutes for head coach Joel Quenneville.  All three combined for four points (2G, 2A) and over 31 minutes of ice time.  They acquitted themselves well when facing the Coyotes’ top line of Keller, Max Domi and Derek Stepan, only giving up the Keller goal.

Kaner owns the Yotes
Patrick Kane continues his dominance over the Coyotes, improving to 15 goals and 28 assists overall since he started playing against them in 2009.

Next game:
The Blackhawks are off for two days.  They face the newest kids on the block, the Vegas Golden Knights, Tuesday night in Las Vegas.  As of the publishing of this piece, the Golden Knights have defied expectations, winning five of their first six games.  They lost starting goalie Marc Andre Fleury to a concussion, but backup Malcolm Subban has been tremendous on goal, winning his last two games.  He currently has a 2.42 GAA and a .911 save percentage.