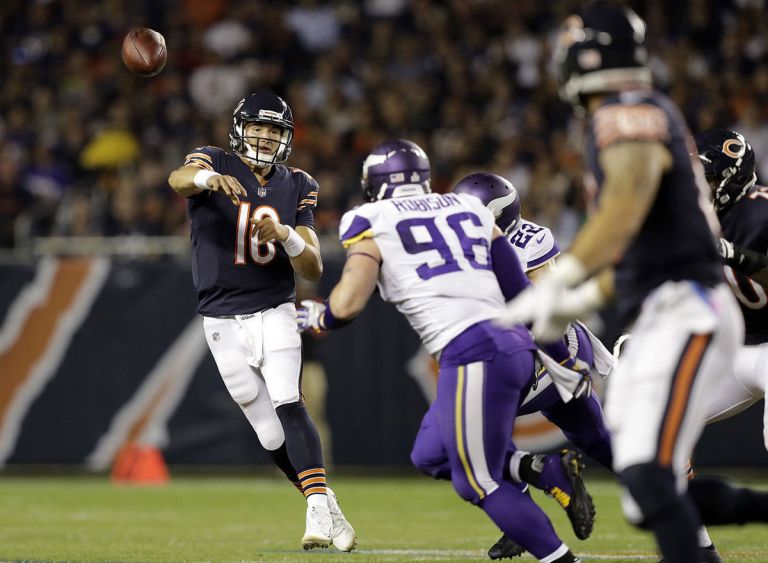 Statistically, this game was nothing special for Mitch Trubisky. He also made mistakes and left some plays on the field, and had a crucial late pick that pretty much gave the Vikings the win. He went through a 1 for 10 completion to incompletion period at one point as well. However, his debut did reveal a bunch of tangible evidence that this kid has what it takes to be a top-notch starting Quarterback in this league and provide this bi-polar fan base with a little bit of hope for the future.

First thing that was noticeable was the way he seemed to inspire his teammates and energize the team and the fans. That was about as enthusiastic of a crowd as I’ve seen at Soldier Field in quite a long time.  Second thing I noticed was the poise he showed out there. The kid looks unflappable. Third thing anyone with a pair of eyes saw was his athleticism. It was good to see boot action plays back in the offense. Fourth thing you saw was the arm talent. Kid can spin it. Fifth thing was his accuracy. Well-publicized and talked about during the draft off-season and proved to be every bit true. Sixth thing that stood out was his real-time processing and game awareness. The ability to see something and process it in split seconds and make a quick read and correct decision. All traits that make a starting quarterback successful at the highest level of football. The All-22 was put out last night so let’s dive right into it, shall we?

Since it’s hard to illustrate energy in stills I’ll use the now famous 2 point conversion drawn up by Bears Offensive Coordinator Dowell Loggains and perfectly executed by the Bears offensive unit. These are the types of things that can energize a team when a Quarterback can execute plays like these. Where you feel you can draw something up that will work and be near indefensible. The Vikings had no shot on this play. I would not be surprised to see this play pop up in other big situations and maybe even play fake off of it for big passes downfield. Here Trubisky gets the snap out of shotgun and hands off to Jordan Howard heading to the right. As he passes Miller heading right from left Howard hands Miller the ball. As the defender gets ready to stop Miller on this bizarre read option he tosses it to Trubisky completely undefended in the right flat and waltzes in for the 2 pointer energizing the crowd and the team.

On this play, Trubisky shows advanced poise for a rookie. The Vikings overload the left side of the line and send the house. One player breaks through the B gap unblocked. Trubisky never panics and uses his athleticism to run away from the blitzer and makes a throw to Zack Miller that almost gets completed. If that had been most rookies or Glennon that was at best a sack and maybe even a panicked turnover. On this play, his protection messes up. Benny Cunningham has an opportunity to stop the blitzer and give Trubisky the time needed to make a play but instead lets him go right past him and decides to double team on Josh Sitton’s man. Despite this mistake and a defender barreling down on him with a 5 yard running start coming at him at full speed he keeps his composure and limits the damage on the play and even almost makes a positive gain on it.

Here is a boot action sprint out we all want to see from Trubisky. Bears start out in 11 personnel with Zack Miller lined up on the right side of the formation than motioning to the left side to hopefully move the safety away from the right side and it works as the Vikings had a safety assigned to Miller and motions over to the side Miller motioned to. Post snap Bears roll out Trubisky to his right where he makes a jump pass off his back foot and hits Tre McBride III  downfield perfectly led towards the sideline for a big 25 + yard completion that was brought back on a questionable penalty.

On this play, the Bears do an excellent job selling the run with the pre-snap formation and Trubisky does a great job of ball handling selling the play action and then booting right. Bears start in 21 personnel (Two backs/one Tight End). Bears also bring Michael Burton in to play Fullback and even make it look more like a run play. He sts up on the left side to get all the action going that way on the play fake and giving Trubiky room to roll out and deliver a pass downfield showing off that arm talent he has making another high velocity and accurate pass on the run. He had two options here but unlike his predecessor Mike Glennon he chooses the longer throw again on the run with a laser right to McBride III.

Here is another example of Trubisky’s arm talent. It isn’t just about strength and accuracy but throwing fro different launch points and odd arm angles. Bears start out in 12 personnel (One Back/Two Tight Ends) with a tight trips formation to the left. Post snap Trubisky rolls to his left and while on the dead run makes a pass to his right in the seam to Miller with a sidearm angle on a line with zip! Now, this was an off-schedule play as he originally drops back and starts to go through his progression before moving outside the pocket to his left after seeing a defender get loose from a block and begin to start towards him which ultimately results in a perfect pass right in between Miller’s numbers.

To be honest there were some balls that he did not throw with great ball placement, but for the most part he did. I feel that he’s going to get even better as he gets to know the league and his own personnel not to mention develop more confidence. Something he has in abundance already.

On his very first pass play in the NFL Trubisky shows this amazing accuracy that he has. Bears run a simple play out of 12 personnel (one Running Back/Two Tight Ends). Not only does he display his accuracy but also his awareness (which I’ll get to later) as he quick snaps it after seeing the Cornerback assigned to Kendall Wright 10 yards off the line of scrimmage and Trubisky wasted no time in going to him sensing an easy third down conversion. The cornerback does a good job of driving downhill and almost getting to that out route to break it up but Trubisky put it in the perfect spot that only Wright could grab. Perfect ball placement here.

Here you see Trubisky’s ability to make quick reads and then the correct decision off that quick read. On this play Bears start out in 11 personnel (one Tight End/ one Running Back). Just as it was on Trunisky’s first pass play the defending Defensive back on Wright plays off coverage 10 yards away from the line of scrimmage. Instead of an out pattern both Wright and Trubisky make the right read and go with the in route and get the first down. Trubisky makes the correct decision here even though if he’d have waited maybe he could have connected with Joshua Bellamy downfield on the post-fly pattern, but this was a sure thing and a stick mover.

To shorten this up it’s abundantly clear that Trubisky possesses all the requisite traits to become one of the best Quarterbacks in the league for a long time. Not just physically but also mentally and as a leader who can direct and inspire his team. During and after this game social media went bonkers in a negative way, but this was actually a very positive game for the Bears. It shows that the future is bright as they appear to have the single most important position in football and possibly all of sports filled for the next decade-plus. Loggains had an excellent game plan and Trubisky handled it like a vet. If not for some shaky referring and some poor execution by some of the Bears personnel this one would have been in the win category. As this goes along things are going to start to turn in the Bears favor. Rejoice Bears fans.