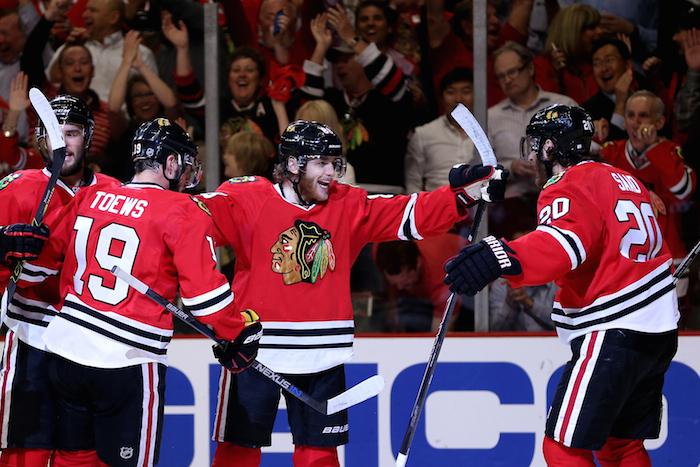 The Chicago Blackhawks continue the amazing start they had Thursday night, drubbing the Columbus Blue Jackets 5-1.

The Hawks didnt wait long to get the Madhouse on Madison rocking, with Patrick Kane burying a wrister top shelf against Blue Jackets goalie Joonas Korpisalo 1:33 in the first.  During the play, center Nick Schmaltz received a thundering hit from d-man Jack Johnson.  Schmaltz left the game shortly, came back for a shift, and left the game again for good.  Brandon Saad doubled the Hawks’ lead six minutes into the frame, scoring his fourth goal of the young season on a power play.

Hawks captain Jonathan Toews scored his first goal of the season in the middle of the second period.  31 seconds later though, Columbus gets on the board, with rookie Sonny Milano getting a fortunate bounce past Corey Crawford.  Jan Rutta scored his first ever NHL goal a minute later, burying a rink wide pass from Kane that passed three different bodies.  Richard Panik ended the night on a good note as well, tallying his second of the season, a one timer from a faceoff win by Toews.

Crawford was once again spectacular on the net, making 32 saves out of the 33 shots he faced.  Crow made some A plus saves tonight, including a really good point blank save on the power play from Blue Jackets forward Cam Atkinson. In two games, Crawford has only given up 2 goals, with a .968 save percentage.

The Toews line continues to show signs that it will be a force to be reckoned with this season.  The Toews goal in the second period was brought forth by a huge hit by Panik on a Blue Jacket.  The combination of physicality and good old fashioned garbage pail work in front of the net will be the catalyst from some big goals by this line.

The Hawks d corps also deserve some recognition with this game.  All three d pairings were very effective, playing that shutdown type of game that the Blue Jackets never really had the answer for.  They protected the red line to great effect, which allowed the offense to be more aggressive on the forecheck.

Alex DeBrincat and John Hayden continue to improve on the ice.  DeBrincat might be a small player, but he does not play small, deftly using his speed to make plays as well as not being afraid of being physical.  Hayden continues to be a bright spot in an otherwise serviceable fourth line.

Next game:
The Blackhawks play the Toronto Maple Leafs on the road Monday night.  Both teams have scored 15 goals in their first two games.  Asked about the free-wheeling style that the Leafs have been playing so far, head coach Mike Babcock said “its kinda fun, aint it, but its dumb.”  Both Babcock and Q are known to be anathema to high scoring affairs, so Monday night’s contest should be interesting.

Injury Report:
Nick Schmaltz left early in the first, came back for one shift, and was done for the night right after that.  In his presser, Q said that his injurt is “upper body”, and that he “will not make the trip” to Toronto and Montreal.  Tanner Kero did not play tonight, but Q said that “if it were a playoff game, he would’ve played”.  Expect him to return Monday night.