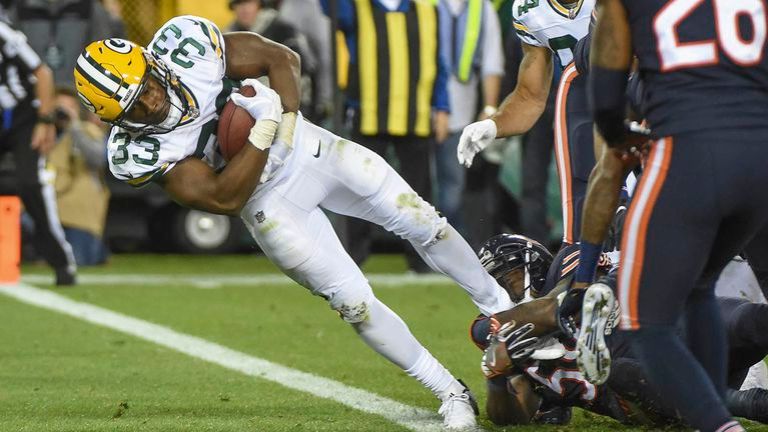 Today is the day I’m usually preparing my All-22 piece. Patiently waiting for it to be released but in the meantime doing my grades but why even bother with film. It’s the same narrative as the previous three weeks. The Quarterback puts them in a bad position and they have to overcome his inept play just to say competitive nevermind actually win. Along the way, there were other areas of the team that made mistakes, but most of them seem to have come out of desperation to try and get something done to make up for the mistakes made by Glennon on offense. The defense made some

Along the way, there were other areas of the team that made mistakes, but most of them seem to have come out of desperation to try and get something done to make up for the mistakes made by Glennon on offense. The defense made some horrendous errors on the back end too. The Packers were running pick plays with surgical precision and getting wide open downfield. Once again Jordy Nelson was using the invisibility route as he was wide open on several occasions as if he wasn’t visible by the Bears defense. As many times as the Bears have been burned by the duo of Rodgers/Nelson  you’d think by now the one thing you’d do is make sure you know where #87 is at all times.

It seemed like communication was a huge issue for them in coverage. This, in my opinion, falls on the coaching as much as it does the players. t some point you have to get your group together and give them key assignment points like I don’t know, cover Jordy Nelson! Make sure you know where he’s at all times. It was more than just the back end. Defensive Line didn’t do enough to disrupt the Packer offense. The Packers were throwing short quick passes so that was hard to get to Rodgers, but not one deflected

It was more than just the back end. Defensive Line didn’t do enough to disrupt the Packer offense. The Packers were throwing short quick passes so that was hard to get to Rodgers, but not one deflected pass at the line and the run game was very effective for the Packers. Not run it down your throat type stuff, but enough to keep the Beas at bay. They were down to their 3rd string running back along with their B offensive line ad the Bears should have completely shut that part of their game down. Very disappointing.

However, the key was the turnovers. You give Aaron Rodgers and that offense short fields you are putting yourself behind the eight ball and getting sunk in the corner pocket. Just to give you perspective on just how much of an impact the turnovers were all you have to do is look at the stats. If you didn’t look at the score and read these numbers you’d think to yourself that it was a close game and the Bears outplayed the Packers.  Bears had more first downs 20-17. Third down efficiency was close with the Packers at 50% Bears at a respectable 41%. Both teams were 100% on fourth down Pack 2/2 and Bears 1/1. Bears outgained them 308 to 260. Bears outrushed them 103 to 91. Even had a higher average gain per play 6.0 to 5.8. Even had a better punt net average 47.3 to 46.2. out-possessed them 31:51 to 28:09. The big stat and the one that counts is 5 Touchdowns to 2 in favor of the Packers.  Turnovers were 4-0 in favor of the Packers. They scored a touchdown on 3 of their 4 takeaways.

With that on to the grades.

This doesn’t even warrant many words. Anyone with a pair of eye and zero knowledge of the game of football saw what was happening and how bad it was. Next!

Tempted to give them a D here, but they did give Glennon enough time. They protected as well as anyone can protect a statue. Disappointing the Bears didn’t dominate the line of scrimmage in the run game however.

Jordan Howard ran hard but had little holes to run through. Tarik Cohen was effective on the few touches he had. After last nights game getting a C is a major accomplishment.

This group didn’t block well. Dion Sims got beat snap one that caused the fumble by Glennon even though Glennon took way too long to get rid of it and showed zero pocket awareness. They made the catches that were makeable, but not enough impact to raise this grade. They didn’t help move the line of scrimmage enough in the run game either.

I didn’ see enough out of this group in any area to even warrant a passing grade. Whether it’s their fault or not doesn’t matter. There were no back-breaking drops and Wright caught all his targets and I saw no egregious wrong routes run. I feel ad giving them a D but no impact plays and 14 points on offense don’t give you the benefit of the doubt.

They weren’t dominated but they also didn’t dominate and that is exactly what they should’ve done. Sure, the short quick passing game put them at a disadvantage. Vic Fangio should have adjusted at some point and played press coverage with cover-2 or 1 over the top all game long to disrupt those short routes and still have cover over the top perhaps, but there were no deflected passes even. I also saw way too much movement at the line of scrimmage in the run game as well. They gave up way too many third down conversions on short yardage and all two of their fourth down attempt.

Read the defensive line summary for this groups reason for the grade. I also lumped in the Inside linebacker group as they don’t deserve their own summary and it would read the same anyway.

Mistakes galore with this group. They were beat physically and mentally in the few attempts that came their way. Enough said here.

Poor communication and the few plays that went behind the corners were not covered by the last line of defense. Played no part in stopping the run either.

Did nothing to help the team out in the way of big plays. They covered fine and punted well but the one opportunity they had to help the scoring they failed with yet another missed field goal by Connor Barth.

team was not prepared, no in-game adjustments that helped, no accountability to players who hurt the team and they left Glennon in the game to piss it away without even care of the result. No wonder the team was uninspired and looked disinterested in most of the second half. Better be Trubisky time versus the Vikings or they may be a riot at Halas Hall. They are in danger of losing their players at this point if they don’t makethe chage.

2 thoughts on “﻿Is It Trubisky Time? Is The Sun Hot? Positional Grades”