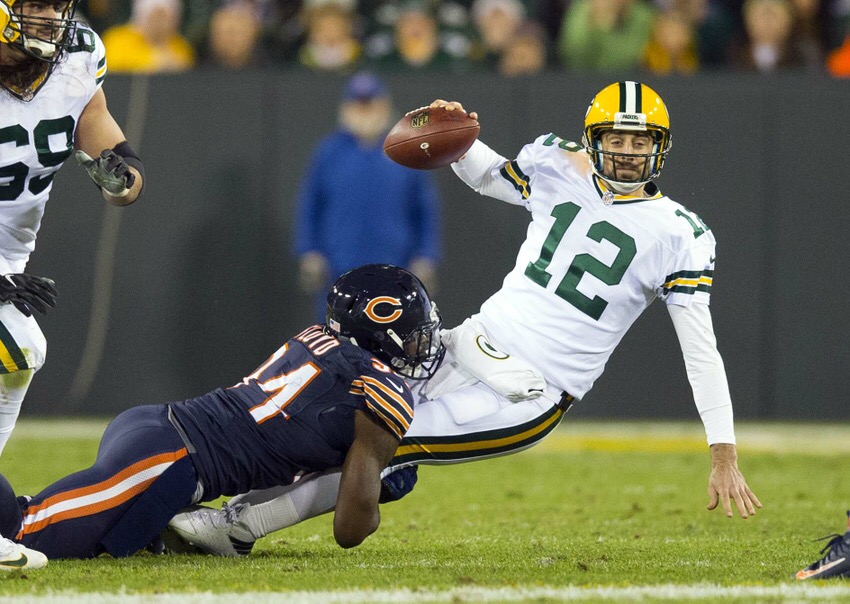 The Chicago Bears biggest strength on defense and perhaps the entire roster arguably is their front seven. They’ve bolstered the depth on the defensive line with the Free agent signings of Nose Tackle/ Defensive Tackle John Jenkins to cove for Eddie Goldman as his replacement when Goldman needs a rest. Almost just as much of a reason is to give the Bears a legitimate veteran Nose Tackle who can anchor the middle of the line if Goldman continues to struggle with injuries.

Last season the Bears were a sieve against the run between the tackles without Goldman’s presence. Imagine if Goldman is mostly available to play and without nursing some injury like he always seems to be since being drafted by the Bears in round 3.

They also signed Jaye Howard to upgrade at the Five Technique or the 3/4 Defensive End position. Mitch UnRein did not take advantage of the opportunity he had with all the extra playing time he got last season and is now either going to be a backup or off the team entirely. Howard has to prove himself healthy over 16 games as he missed a good portion of last season with a hip injury which required minor surgery to remove bone spurs.

Also, factor in the Bears young defensive linemen. Last season’s 3rd round pick Jonathan Bullard will have a lot more experience and will be better prepared to take on the rigors of NFL life in the trenches. Not to mention knowing his competition better. Just being used to the speed of the game figures to help Bullard immensely.

Add in Aikem Hicks as the other starting Five Technique who when paired with Goldman made the Bears nearly impossible to run between the tackles against and also provided elite level pressure in the face of the quarterback.

At inside Linebacker the Bears have their fingers crossed that Danny Trevathan recovers fully from his surgery to repair a ruptured patellar tendon in his right knee. A procedure that takes longer to recover from than an ACL surgery and one some athletes never come back to their former form from. When healthy he and Jerrel Freeman form perhaps the best 3/4 Inside Linebacker duos in the league. Most are predicting he’ll be a lock to be put on the 6 game pup list to start the season.

In which case that gives promising young linebacker Nick Kwiatkowski a chance to show enough to maybe even make Trevathan expendable next season if he continues his upward trajectory where he seemed to get better with every snap he got.

However, none of this matters if Leonard Floyd is not a pro bowler this season. At the very least pro bowl caliber as there are snubs in that popularity contest they call a pro bowl. By that, I mean an elite pass rusher.

Sure, being a three down player who can anchor and set the edge against the run as well as, add some pressures and an occasional sack is nice to have, but if he isn’t that disruptive force Von Miller, Kahlil Mack, Justin Houston, and even Vic Beasley has become the front seven will not be elite. They’ll be very good yes, but not enough to put them in the top 5 and perhaps even top ten of NFL front sevens.

Floyd needs to be Vic Fangio’s Aldon Smith. With an elite Edge rusher like that the defense can do so many more things. Especially in a defense that likes to play conservatively like Fangio does. Generally, there is very little blitzing in a Vic Fangio defense. Instead, Fangio likes to create pressure and havoc along the opponents offensive line by running Line stunts also known as twists to cause confusion and force blown assignments.

Fangio ran what was known as the Texas Stunt when he was at Stanford and of course brought it with him to San Francisco. Justin Smith and Aldon Smith were certainly elite talents and made it possible to pull this off. Both were amazing athletes and that’s what the Bears need. There is no one on this team who is near as athletic as Floyd is at outside linebacker to execute Aldon Smith’s role in the Texas stunt.

While both are not nearly as athletic as Justin Smith, Aikem Hicks and Jonathan Bullard are more than athletic enough to execute Justin Smith’s role in the stunt scheme. However, to take advantage of the space the Edge Rusher gets you need someone with an Elite size/speed combo and quick twitch to adjust lateral movement as need be. This allows the line to execute the play to perfection and cause disruption and offensive failure by the Quarterback resulting in a pressure causing an incompletion or interception. Perhaps a sack and possibly even a strip sack fumble or tip the ball in the air and into the waiting arms of a fellow defensive teammate.

One of the things I noticed about Bullard coming out was how well he worked with his Edge defenders on stunts. Something I outlined in a previous article I wrote last year at Bear Goggles On with stills you can read here. So along with Hicks, Bullard can act the role of Justin Smith on this line stunt.

Everything will be centered around Floyd this season. Teams will clearly game plan for him especially if he’s off to a hot start. That will present opportunities for others. Once those schemes against Floyd fail as others step up You’ll see more new ways to try and stop him. This should play right into the Bears hands. With Howard, Goldman, and Hicks up front, how can you possibly deploy secondary blocking help as those three can destroy a single blocker on their own? Offensive lines will have to be tricky and the passing game quickened and shortened meaning fewer chances for big plays downfield.

With this also means less opportunity for the defense to make big plays unless you can get there sooner than it takes for the quarterback to set up and the intended receiver to execute their route. Again, Floyd is the only member of that front seven who can do this so therefore he must. This will also go hand in hand with Fangio’s press man scheme holding up receivers at the line and disrupting timing on the route thus forcing the quarterback to hold on to it longer. If Floyd can’t consistently take advantage it makes even a split second longer too long and gives the Quarterback time to wait and reload and the receiver to break free.

This defense has a chance to be special, but only if Floyd is Pro bowl special!