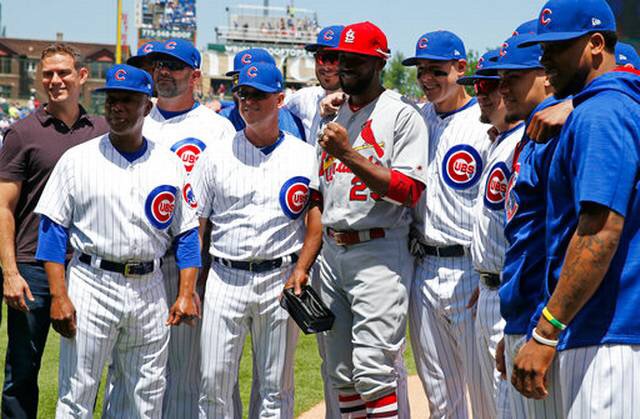 It has been since December of 2017 that former Cub Dexter Fowler became a St. Louis Cardinal, and it still has an odd vibe to it. The Cubs have played against Fowler two series so far this season but both in St. Louis. Dex finally returned to Wrigley Field Friday afternoon to get his World Series ring in front of a warm ovation.

It was a beautiful June afternoon when Dexter Fowler came out to greet his old teammates to get his ring and pose for a picture at home plate. Jason Heyward and the newly engaged Anthony Rizzo greeted him at home plate just after a pre-game video tribute on the big boards. The crowd gave him two nice ovations, one for the video montage and one for his first step to the plate leading of the game…which turned to groans as Fowler crushed a leadoff homer off John Lackey. But still, it was a nice moment to commemorate one of the key pieces in the 2016 championship run.

While Fowler contributed with the bat last year putting up .276/.393/.840 with seven homers in 125 games and his first all star game, he was also a postseason hero with the leadoff home run in game 7 of the World Series and .333 average in the NLCS. Some people think his presence is more missed than not because of his leadership and positive attitude in the clubhouse. Hard to know exactly but with all the positive things said about Dex as a teammate it is easy to believe it.

Going forward, Cubs fans should always have the memories of what Fowler did in Chicago…but he is a St. Louis Cardinal now and he will be treated as such.