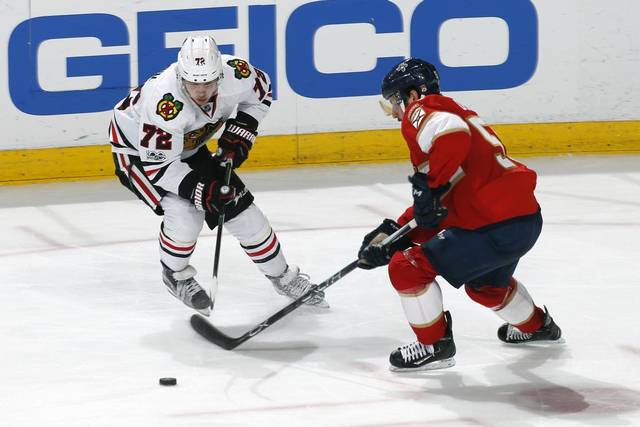 To be honest, this game shouldn’t even have a story. This was one of the most embarrassing defeats I’ve seen in a long time from this team. The only soul settling thought I can think of with this loss is that the Hawks are heading to the playoffs regardless and there’s no way this can happen again.
In case you’re wondering, it was nearly comical to watch. No matter which way the Hawks were going down the ice, they looked like a circus act. A penalty here, a penalty there, a defenseman slipping here, a turnover there! It was incredibly uncharacteristic.
The Florida Panthers leveled the Hawks by scoring seven–yes, seven goals. Corey Crawford let in four goals on 24 shots and Scott Darling didn’t do any better letting in three goals on six shots. To be fair, it looked like the Hawks had given up once Crawford was pulled, but there were some questionable goals on each goaltenders end.
Jonathan Marchessault scored a hat trick in the win for the Panthers, being the number one star in my book. Goaltender James Reimer was a close second, but further inspection lead me to believe he wasn’t tested much during the game to be considered the number one star. Both Patrick Kane and Jonathan Toews had a combined one shot on goal that came in the third period. He definitely wasn’t tested much with his 25 save shutout.
Embarrassing? Yes, but sometime’s you’re going to have an off-night.
After the loss, captain Jonathan Toews wasn’t too pleased with the teams’ effort and their latest play. He stated, “If we continue to play like that and think we’re going to turn it on come playoff time, we’ve got another thing coming.”
In all seriousness, he’s right. The Hawks haven’t played too terribly lately (Not counting the game versus the Panthers), as they’ve become one of the hottest teams. They’ve climbed the standings and proven to the league that they’re no one to mess with.
Certainly, if an elite group of players is going to let a little bump in the road derail them on this great streak they were on, they won’t be fighting for long come playoff time.
They will regroup and restore, after all, this is the Chicago Blackhawks we’re talking about.