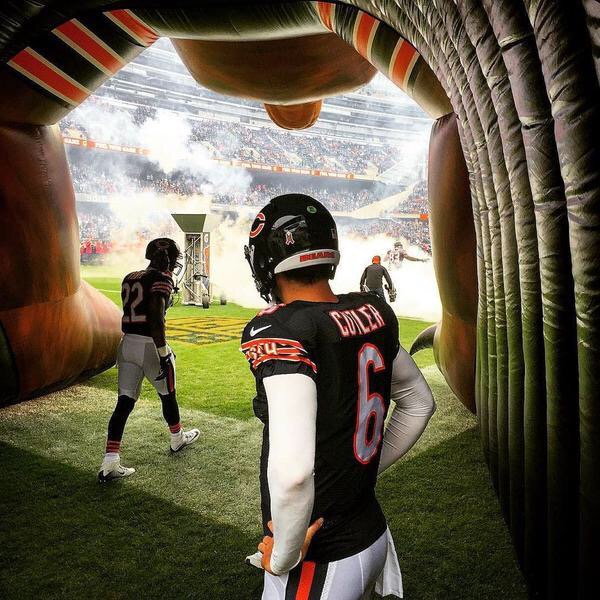 The Bears and their fans are saying goodbye to QB Jay Cutler. He was released by the team on March 9th after eight seasons as the starting quarter back in Chicago. Some fans are sad and some are celebrating like they won the Super Bowl. Cutler’s image in the eye of the media and public saw a lot of negativity and frustrations as well as some praise as he was probably the most controversial athletic figure in the Windy City this past decade.

Cutler came to the Bears before the 2009 season after being traded from the Broncos for QB Kyle Orton. When the news broke the city of Chicago jumped up as many brought back dreams of a Super Bowl parade heading down State Street for the first time since 1985. Despite one trip to the NFC Championship game in 2010, the Bears never made it close to the Super Bowl in the Cutler era and went through three head coaches and three GMs.

Cutler went through many ups and downs…and the downs seemed to overshadow the ups most of the time. Much of the Bears fan base was tired of him as he has been known to throw interceptions and make some controversial decisions. At the same time, Cutler has been also acknowledged by some as statistically the most productive QB in Bears history.

Cutler is first in all-time Bears QB stats in:

With all that being said, he threw the second most picks  while playing the second most games (109 INT in 102 games) at QB for the Bears (Sid Luckman leads both categories). His first season as a Bear did not go well for him on the stat sheet throwing 26 picks vs 27 TDs with a career-low 76.8 rating in 16 games. He improved the interception numbers over the years but still averaged 12 interceptions since 2010, so the picks were always a story even when he was putting up productive numbers.

Though Cutler has been intercepted a number of times due to forcing some throws and not-so-great decisions, there were times he was a victim of his own team. A number of years he had garbage offensive line protection. In 2010 he was sacked 52 times and often had little time to reach his eyes down field. His first four years as a Bear he was sacked a total 148 times for 965 yards lost. That makes throwing downfield harder for any quarter back.

Not only that but after his first few years of having a great defense under Lovie Smith, those players and Smith would move on and 2013 through 2015 would see some of the worst defensive seasons the Bears have ever had. Under coach Marc Trestman the Bears gave up 478 points in 2013 and 442 in 2014 which was a DRAMATIC increase from team’s past. Despite how Cutler played, he seemed to get all the flack for losing when the defense couldn’t stop a pee-wee team.

With three GMs (Angelo, Emery, Pace) with three coaches (Smith, Trestman, Fox) and six offensive coordinators (Turner, Martz, Tice, Kromer, Gase, Loggains) the Bears have been a carousel of schemes, teams and philosophies which have failed to get a championship since 2009. Cutler got along with some coaches better than others and this is where his character and willingness came into question by some fans and media. Controversy over his “toughness” began in 2010 after leaving the NFC Championship game with a knee injury and has come in question several other times he has been hurt the past few years.

The infamous “Don’t caaaaaare…” Cutler quote was used against him many times during his Bears twilight years.

While I really do not think he didn’t care and he truly gave it his all on the field, the way he presented himself turned off a lot of people. That is a whole other can of worms to look into but he wasn’t a media darling like Charles Tillman. But Cutler played through times where he got beat into the ground and tried to keep going despite of it and I don’t think it gets enough credit.

To look at his Cutler’s legacy in Chicago now that he is gone, here are the basic numbers:

In the end, while Cutler was not elite like a Brady, Rodgers, Brees or Manning he still put up some very productive number as a Bear. No doubt he had some rough moments on the field with some character questions, but he was too often a scapegoat when the team was failing. Bad drafting, bad development, bad coaching, bad management and overall a messy franchise the past decade has all contributed the lack of success.

Cutler wasn’t perfect, but it’s not all his fault.